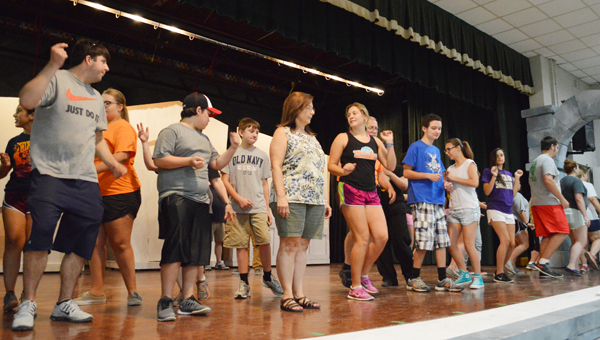 The cast and crew behind the ‘The Addams Family’ are promising a wonderful, creepy good time when the show debuts next week.

RESERVE — Marcy Bordelon has faithfully participated in community theater since 2003, but this month when she takes the stage as Wednesday Addams, she will be acting in her first lead role in a summer production.

Bordelon will star along with others in St. James Community Theater’s “The Addams Family,” which will run under the direction of Darryl P. Clement at 7:30 p.m. nightly July 24, 25, 30, 31 and Aug. 1 at St. Peter School in Reserve.

A matinee performance will take place at 2 p.m. July 26, and a Dinner and a Show collaboration with The Creole House Cafe is available July 24.

Bordelon said she is excited to take to the stage and show the audience the product of all the hard work cast and crew members have put in, adding she is most excited about performing her solo, “Pulled.”

Production organizers said “The Addams Family” features the story of every father’s nightmare — Wednesday Addams, the ultimate princess of darkness, has grown up and fallen in love with a boy.

Highjinks ensue when members of the delightfully dark Addams family host a dinner party for Wednesday’s normal boyfriend and his parents.

Jason Chabaud, a St. James Community Theater board member since 2008, said he thinks audience members of all ages will love the fresh, new show.

“‘The Addams Family’ is a classic TV show our older crowd will recognize, but this musical still touches the younger crowd with a great story line, characters and music,” he said. “This is one of the newest Broadway hits to be released for local theaters to perform. There’s no better way to reach new audiences than with something they’ve heard of and can immediately relate to.”

Theater Board President John Leblanc said after a six-year hiatus from offering shows, St. James Community Theater organization supporters are enthusiastic about returning to the summer stage with the production, which is supported by a grant from the River Region Arts and Humanities Council.

“Exciting is an understatement,” Leblanc said. “We’re all very happy to be returning new musical fun to the River Parishes. St. James Community Theater has lots to offer the community. Being able to have Darryl Clement at the helm guarantees this show will be done very well and at the highest quality in theater. He’s directed all the recent hits in the area and is well recognized for high quality, high energy shows.”

Leblanc said many things contributed to the theater’s hiatus, including difficulty finding a venue that had the components to put on a full-scale musical, such as lights, sound, stage layout and seating capacity while Lutcher High School officials worked to find a way to fix the broken stage lights in its auditorium.

Tickets are on sale now at stjamestheater.org and are also available at Roussel’s in Gramercy and Allied Express in LaPlace.