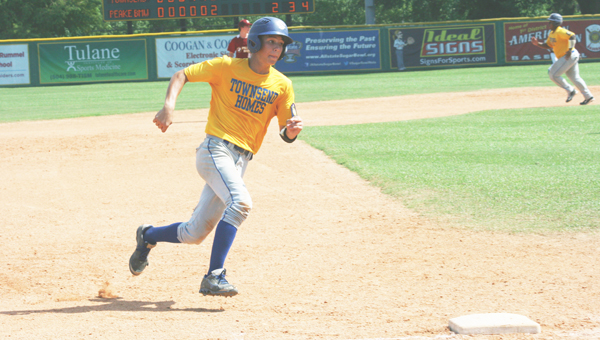 NEW ORLEANS — On Saturday it looked like the St. Charles Catholic-based  Townsend Homes Post 159 may be on their way out of the Southeast Regional American Legion tournament once again.

While Townsend had made the regional the past four years, they had been eliminated each time and were on the verge of being eliminated again. The team had already lost to Brother Martin-based Peake BMW 10-2 earlier in the week, and in the double elimination tournament, only one more loss would see them out of competition and without a chance at the state tournament yet again.

Trailing Holy Cross-based Ponstein’s 3-1 in the eighth inning on Saturday, Townsend rallied, tying up the game and taking it into extra innings for the win.

Nick Scioneaux notched a win as pitcher against Peake BMW.

Townsend head coach Wayne Stein said that performance spoke to the resiliency of his players.

“Our kids scored two and we went into extra innings and we actually scored four in the tenth,” Stein said. “We were there, we were on the brink of going home and we found a way to get it done. I think that game on Saturday spring-boarded us into we felt we can get it done anywhere.”

After that close call against Holy Cross they got it done. Townsend went on streak beating Rummel-based Deannie’s Seafood 5-1 and in a double-header in the sweltering heat on Monday took down Mandeville-based LLOG Exploration 11-4 and finally Peake BMW 10-2 to win the Southeast Regional Championship.

In the course of the tournament, Townsend made history, and in the final two innings of the championship win over Peake BMW Stein reminded his players what they were in the verge of.

“This is the first time in St. Charles Catholic/Townsend Homes history that we’ve made it to the state tournament, and the first time we’ve ever won the Southeast Regional,” Stein said.

“That was a big battle cry for our kids. We’re six outs away from history. I just told them this is going to pay off for us in prep We know how to play in tournaments and we know how to play great competition. We’ve been down in this thing, we’ve been up and we’ve been able to handle it in every sense of the word and I am proud of my guys.”

Stein placed his team’s success squarely on his pitching staff.

“I think a lot of it obviously was pitching,” Stein said. “We had to play six games versus Brother Martin playing four. We got good performances from our pitchers, they all got five or six innings and we were able to piecemeal some relief and I think that was the biggest key, just getting guys to go out there an throw strikes and we played phenomenal — from Friday on we really played flawless.”

It was Monday’s win over Mandeville that propelled Townsend in the regional championship and gave them an automatic bid to the state tournament, Zack Weber started the game, pitching the fist three innings, and Zack Roussel finished it off pitching the last six.

In the championship versus Peake BMW, the seldom-used Nick Scioneaux pitched all seven innings giving up only two runs.

“It was great just knowing that I had to come out here and throw strikes for my team, knowing that when I am on the mound we have one of the best defenses ever. I know they’ll make the plays for me as long as I throw strikes,” Scioneaux said.

Going into the regional championship game, Townsend had already wrapped up a spot in the state tournament. Still, Scioneaux said the team was motivated.

“Knowing we were already in the state tournament we still wanted to win this since this is the first time we’ve ever made it this far,” Scioneaux said. “We just wanted to make a statement.”

The win over Peake BMW in the championship game was sweet given that Townsend had just lost to them a few days before.

“It felt good to be able to return the favor a little bit after the way we tuned it over to them on Friday,” Stein said. “We played well for eight innings of that game, but we gave up the seven spot in the ninth versus them. All of the sudden we turned the tides. It all comes down to summer baseball and who wants to be there. Our kids wanted to be there and they said, ‘we are here we may as well win.’”

Going into the state tournament Stein said he is encouraged by his team’s recent performances and believes they can handle any level of competition.

‘We are a 2A school and we just won the Southeast Regional against a lot of 5A programs,” Stein said. “I am excited about that. I think it says a lot about our program.”

The state tournament will take place from July 18 to July 22 at Kirsch-Rooney on Delgado Community College’s campus in the  New Orleans.