River Parishes, beyond rally for girl, 5, with heart defects 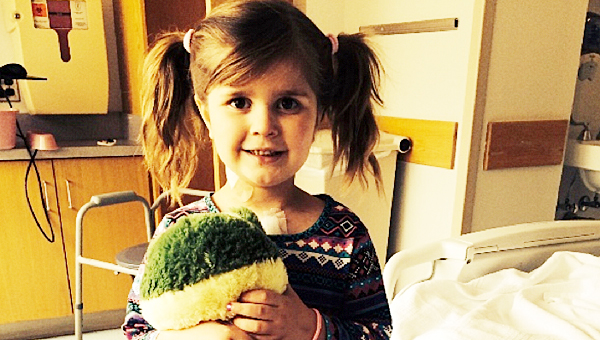 Many neighbors, friends, businesses and strangers have rallied to support 5-year-old Aubrey Ann Tierne, who has suffered from heart defects since birth.

NORCO — It started off with a simple gesture by neighborhood children on behalf of a sick, young girl.

Cousins Megan Hales and Brock Lawrence Jr. got together in Norco last month with an idea to help the Tierney family of Norco.

Five-year-old Aubrey Ann Tierney has suffered from heart defects since birth — three in all — for which she has had to undergo a series of surgeries to correct.

Her mother, Trish Caples-Tierney, was six months along in her pregnancy when doctors told her the baby she was carrying had a birth defect.

Caples-Tierney was offered a procedure that would terminate the pregnancy. However, she and her husband, Brandon Tierney, decided to take the child to term.

“They told us we could just not have her at all,” Caples-Tierney said. “I didn’t feel like that was a choice we could make. We had two other children prior to Aubrey, and it wasn’t like we could say, ‘should we keep them or not?’”

When deciding to go through with the pregnancy, the couple had no doubt they had been bought into a challenging ordeal. While doctors initially diagnosed Aubrey with a birth defect, they did not know she would have three. At first, doctors were unsure if Aubrey could be expected to live to six months old, but she defied expectations by undergoing and responding to delicate surgeries at seven days and six months old. The surgeries were meant to essentially rebuild her heart to ensure its proper function.

Today, Aubrey has outlasted that initial lifespan prognosis ten fold, but is still not without health problems. Aubrey is an active child, and the Tierneys are doing their best to help her live normally despite the challenges. Still, they are cognizant Aubrey still occasionally may have to undergo medical procedures.

More recently, in June, Aubrey had to undergo such a procedure undertaken by a pediatric cardiologist in Boston, which brought up a question of cost. Heart surgery for the average adult is costly, but that cost is heightened for a child.

While Aubrey was lucky enough to have good health insurance provided by her parent’s employer, the medical expenses were still extensive. Incidental expenses such as airfare for the family of five as well as lodging made things worse.

“We have to pay for this. It kind of freaked us out.”

When Caples-Tierney was asking a neighbor to watch the family’s 15 chickens, she revealed why they would be in Boston — for Aubrey’s heart surgery.

Three hours later the Tierneys heard a knock on the door. It was Hales and Lawrence.

Caples-Tierney said she and her husband had not really talked about their daughter’s condition much, and it showed in her conversation with Hales and Lawrence.

Although Hales and Lawrence knew Aubrey, they were unaware of her health problems.

“They had no idea,” she said. “You wouldn’t know that Aubrey was sick unless you knew about it because she controls her own limitations.”

While Caples-Tierney said it is not in her family’s nature to ask for assistance, they were ready to accept help when offered.

After hearing about Aubrey’s condition, the cousins asked if they could do something very simple, really the best thing they could do given their age and limited resources.

“They wanted to do a lemonade stand,” Caples-Tierney said.

Hales and Lawrence set up a lemonade stand the following day on Apple Street in Norco to raise money in advance of Aubrey’s latest trip to Boston for surgery.

What began as a rather simple idea to help a young family and child in need quickly spread into an area-wide mission of River Parishes.

At 9 a.m. the lemonade stand started serving with Aubrey at their side helping along, and soon all of Apple Street was backed up with traffic. A neighbor’s son made T-shirts that said ‘Team Aubrey’ to easily identify the growing number of volunteers involved.

“Even the garbage men, after they ran their route, came back and got some lemonade,” Aubrey’s grandmother Wendy Louque said.

One man, who did not give his name, paid $100 for a single cup, but he was really buying something much more valuable.

In all, Hales and Lawrence raised $1,500 that day and sparked an outreach that morphed into something larger.

People in the community who went to the lemonade stand started offering different services. Before long they were able to put together a welcome home party. On Aubrey’s return from Boston, and in light of her successful surgery, the community threw another fundraiser in which 11 gift baskets ranging from $150 to $500 were raffled off.

Lance Oncale, manager of Fatty’s in LaPlace, brought a pot of jambalaya that was partially paid for by Jack’s Towing. Oncale sold more than 300 servings, even going so far as to buy to-go containers to send home with participants.

Roussel’s Fine Jewelry in LaPlace jumped in by contributing gift cards to one of the baskets that was auctioned off. They were joined by LaPlace-based Birdies Food and Fuel, which provided a eight-pack of Zephyrs tickets.

Pretty soon people from all of the River Parishes were involved.

“It was amazing, from Garyville to Boutte to Lutcher,” Louque said. “I still have a whole stack of thank you notes I have to send out, some to even as far away as Ponchatoula.”

In addition Orkin Pest Control, where Trish and Brandon are employed, paid for their plane tickets to Boston and a non-profit in Covington picked up their hotel tab.

The fundraiser has also moved online.

“One of my friends suggested we start a Go Fund Me page,” Caples-Tierney said. “It jumped to $4,000 in the first three days.”

That account has raised more than $6,500 to help the Tierneys retire debts related to the trip and Aubrey’s care.

Overall, Caples-Tierney said of the outpouring of support has been heartwarming.

“Everyone just owned it like it was their responsibility, which is pretty awesome,” she said. “They said, ‘don’t worry about anything we’ll take care of everything.’”