‘Annie Get Your Gun’ takes Reserve stage this week 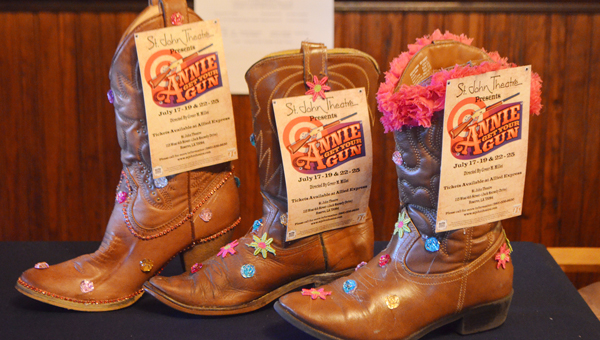 Tickets are $15 for regular admission, $12 for seniors and $10 for children. Tickets may be purchased at the door or in advance at Allied Express.

RESERVE — A veteran community and regional actor at a young age, Abbie Shull said playing the role of Annie Oakley has been a dream of hers since she was a little girl.

“She is such a strong woman, especially since she lived in a time when women weren’t expected or allowed to be independent,” Shull said. “Annie is really a feminist icon, and it is an honor to play her.”

Shull is part of a cast and crew of approximately 50 people putting on “Annie Get Your Gun,” which opens this week at St. John Theatre in Reserve.

The classic musical centers on Annie Oakley, who is known as the best shot around and manages to support her little brother and sisters by selling the game she hunts. When Col. Buffalo Bill discovers her, he persuades her to join his Wild West Show. It only takes one glance for Annie to fall head over heels for dashing shooting ace Frank Butler, who headlines the show.

She soon eclipses Butler as the main attraction, which is bad for romance. Butler hightails it off to join a rival show, his bruised ego leading the way, but is ultimately pitted against Annie in a final shoot-out.

Shull said she sees a lot of herself in Annie, adding she has always been different and Annie is certainly that.

“I really identify with her sense of strength and independence,” Shull said. “I think people will enjoy this show, because it really is the essence of what a musical should be. It’s campy, romantic and funny. Plus it has all these classic Irving Berlin songs that people know and love.”

The classic music is one of the show’s main draws for Reserve native Greer M. Millet, who is serving as the musical’s director.

Millet described the performance as wholesome, family fun the entire family would enjoy.

“Who doesn’t love a good country-western?” she said. “I just think it is delightful. You will know a lot more songs (from the musical) than you thought you would. There are a lot of songs you’ve been humming for years and probably didn’t know it came from this show.”

Highlights include “There’s No Business Like Show Business,” “Sun in the Morning and Moon at Night” and “Anything You Can Do, I Can Do Better.”

The production team, consisting of more than 30 actors and more than a dozen orchestra and crewmembers, has been working since May.

“It has been a commitment, especially from my choreographer (Lauren Snowdy) and musical director (Jordyn Keller), who are two spectacular young ladies,” Millet said. “They have helped me get the cast into shape and ready.”

The director said her leads have been a dream to work with, adding the entire cast has been receptive to notes and has grown into the production through months of hard work.

“(Annie is) a good, strong role for a woman,” Millet said. “She’s stubborn, she’s headstrong and she is confident. She knows what she can do and doesn’t take ‘no’ from anyone. That is part of her spunk, her character. It can be empowering. She just doesn’t back down.

Ural enjoys playing Butler in the musical because the character has a lot of personality, something the actor says he can relate to.

“Frank is very emotional, and it is a challenging role,” Ural said.

“I enjoy a good challenge.”

As a personal favorite, Ural is excited to sing “My Defenses Are Down,” because that is when Butler “lets loose and finally shows he is ready to surrender to loving Annie.”

Audiences are sure to love the show, as well, and the fun begins this week.

Tickets are $15 for regular admission, $12 for seniors and $10 for children. Tickets may be purchased at the door or in advance at Allied Express.