Baylor star aiming to catch on for Pan American Games 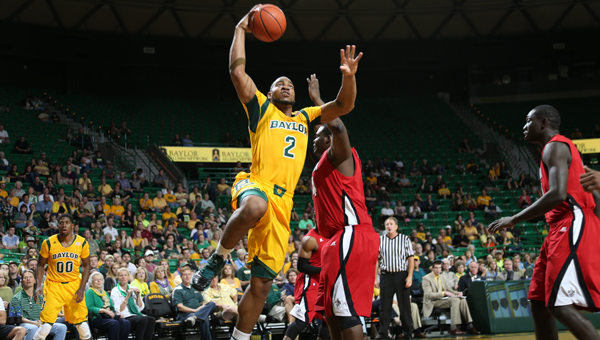 Rico Gathers, center, one of the best rebounders in the NCAA, snags a ball. (Photo courtesy of Baylor University)

LAPLACE — Basketball star Rico Gathers has been making heads turn since his prep days at Riverside Academy and in more recent years at Baylor University, but he is now looking to take his skills to the international level.

Gathers was invited to take part in training camp beginning this week for Team USA in preparation for the 2015 Pan American Games.

The Pan American Games are much like the Olympics — held once each four years — except the participation is limited to the 41 countries located in North, South and Central America and the Caribbean. Several Pan American basketball team members have later gone on to represent Team USA in the Olympics.

The invitation is just the latest in a string of successes for Gathers. He had an outstanding prep career in St. John, leading Reserve Christian to one state championship and Riverside Academy to two more along with being named Louisiana’s “Mr. Basketball” in 2011.

“I think it is a nice honor,” he said. “It is rewarding Rico for all of the hard work he has put in. I think he is being recognized as the best rebounder in the country.”

Byrd added that for a college player to be asked to try out for the team is a big deal.

“What people don’t understand about that is that team is not just college players, it is mainly pros and older guys, international players, who are going to represent that team,” he said. “They only pick four or five college guys, so for Ricardo to be in that mix is a really special honor, and we are real proud of him.“

Since moving on to Baylor University in 2013, the 6-foot-8, 275 pound power forward has played in four post-season games in back-to-back NCAA tournament appearances and has been central to the Bears’ success in recent years. In 2015, the Bears ended the season ranked No. 14 in the AP poll.

Over his three seasons at Baylor, Gathers also has put together an impressive list of personal performances. In 2015, Gathers’ 11.7 points and 11.6 rebounds, good for fourth best in the country, per game in 2015 helped his team rank No. 13 in the nation in rebounding.

“There is a tremendous collection of talented players with varying skill sets who will be trying out,” Syracuse University head mentor Jim Boeheim, chair of the USA Basketball Junior National Team Committee that is responsible for player and coach selections, said in a release. “There’s no question the ones who ultimately make the team will form a team capable of challenging for the gold medal.”

Of those invited, 12 will be selected to play for Team USA in the 2015 Pan American Games basketball competition to be held in Toronto, Canada July 21 – 25.