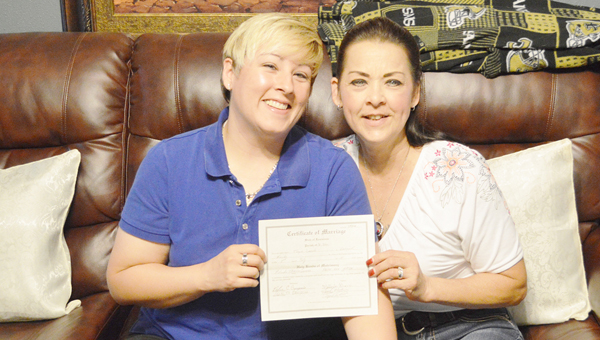 LAPLACE — History was made in St. John the Baptist Parish Tuesday when the Clerk of Court’s office in Edgard issued its first same-sex marriage license. LaPlace couple Faith Upton and Melinda Guerra were the recipients of that license, and the milestone in their relationship is nearly 15 years in the making.

“I never thought I’d ever see it in my lifetime,” Upton said on the legalization of same-sex unions.

The couple first met in 2000 at work, and even though their relationship took a four-year detour in the form of a separation, they are excited their commitment to each other can now be legal.

The U.S. Supreme Court ruled gay marriage legal in all 50 states June 26. Guerra learned the news at work, and she called a sleeping Upton to tell her.

A friend drove Upton, who is unable to drive at this time, to Edgard Tuesday, where she became the first person in St. John Parish to file for a same-sex marriage license.

“We went over there and I was on cloud nine,” Upton said.  “I never, ever expected to be the first people. Everyone was so nice.”

Because of a 72-hour waiting period between the time a license is issued and then can be returned for filing, and the fact Friday was a holiday for the government offices, the couple said they will submit their signed license next week.

Upton, who has two daughters and one stepdaughter from a previous marriage, said Guerra has been a constant in her and her children’s lives for over a decade. Even during their separation, Upton said she and Guerra remained best friends and spoke every day.

“They love having two moms,” Upton said of their children, adding she and Guerra now have three grandchildren that they love to spend time with.

“We’re proud of all of them,” Upton said of their daughters. “We’ve been blessed.”

“Nobody could ever replace what she gave me,” Guerra said of their time apart, adding the couple decided in February of 2014 to reunite. “I told her ‘let’s try again. We’ll take it slow.’”

“We made it to April,” she said, referencing when Guerra proposed.

“So much for taking it slow,” Guerra said. “In my heart I knew she was the only one for me.”

The couple hosted a commitment ceremony March 14 at Smilie’s restaurant in Harahan, where they said friends and family packed the venue in support.

“We were supposed to have 150 guests, but they stopped counting at 150,” Upton said laughing.

“It was a beautiful wedding. She did not see me until I walked down the aisle.”

“It was gorgeous,” Guerra said while fighting to hold back tears. “I cried like a little girl when I first saw her. It was like an angel walking down the aisle. It was just … it was all the years of emotion poured out in buckets right there.”

Upton said they were hoping by their wedding same-sex unions would be legalized, but they will still celebrate March 14 as their anniversary.

“We are fortunate,” Guerra said. “We are both part of families who support us. We are both very lucky.”