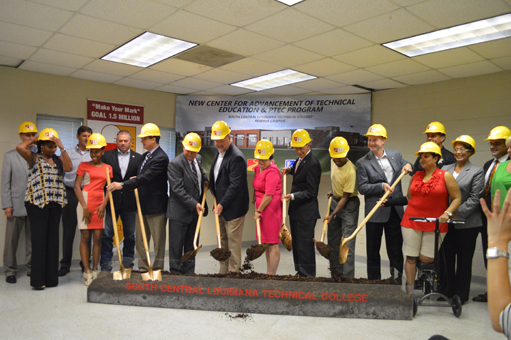 RESERVE — Reserve’s South Central Louisiana Technical College campus, which has an economic impact of over $15,000,000 annually from graduates taking to the work force, will expand by over 26,000 square feet in the next year.

A ground breaking ceremony was held Friday for the campus’ soon-to-be-built Center for Advancement of Technical Education, which officials said will provide the training of 750 students and offer programs such as process technology, industrial instrumentation, industrial maintenance and business office administration, as well as general education courses and developmental instruction labs and classrooms.

Dr. Monty Sullivan, Louisiana community and technical college system president, said the new and larger facility has been needed in Reserve for many years.

“This is the campus we point to as the example,” Sullivan said. “The word ‘reserve’ is used to denote special things, and this a special product … a special place.”

Sullivan said graduates from the Reserve school are “making this community stronger every single day,” and added he and other system leaders are faced with the daunting task of answering, “how in the world do we replicate the magic we have here?”

The $8.4 million expansion was funded thanks to Act 360, a bill approved during the 2013 legislative session to fund capital changes for the 29 colleges that make up the Louisiana Community and Technical College System. The funding requires the recipient college to produce a 12-percent match of cash donations.

“To date, we have received $346,750 in monetary donations to our $1.5 million goal,” she said. “Our supporters are Valero, DOW, Marathon, ArcelorMittal, Associated Terminals, Monsanto, Air Products and Cargil.”

Poskey said those donations are in addition to the land donated by St. John the Baptist Parish, which is valued at $857,000. The donated land borders the campus’ current footprint at 181 Regala Park Road in Reserve.

“This is a public/private partnership,” Sullivan said. “This is not the state of Louisiana writing a check.”

Louisiana Community and Technical College System Board of Supervisors Chair Woody Ogé thanked the industry partners who gathered as part of the standing room only crowd.

“Thank you for your faith in what we can give back to you,” he said. “This is a challenge we’re up to.”

State Sen. Gary Smith said the ceremony marked a good day, but not just because of a new building.

“This local campus has been responsive to the needs of local industry for a very long time,” Smith said, adding the mutually beneficial relationship between the college and local industry led to the expansion of services. “The people who graduate from here … they go to work here. That’s something I’m proud of.”

Parish President Natalie Robottom said the ground breaking was a great day for St. John Parish, adding, “this is our dream for this campus.”

After the dirt was turned, Student Government Association Vice President Caira Kione spoke on behalf of the students.

Poskey said construction is scheduled to be completed in May 2016.

Photo Feature: From our past pages