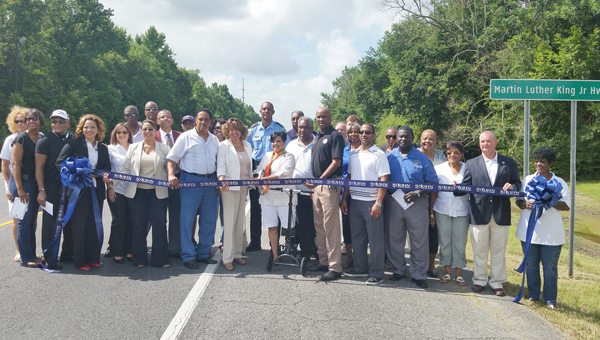 Parish officials began the discussion about naming a street after the slain Civil Rights leader about two years ago following a request from Retired Judge Sylvia Taylor Dunn.

The Council approved a resolution requesting the name change and forwarded it to Gaines for introduction during the 2014 legislative session.

“Dr. Martin Luther King Jr. challenged us to be better people and this Parish is a better place because of his efforts,” Gaines said.

“It is only fitting to rename this roadway as a reminder of a selfless leader who was willing to take a stand for moral courage.”

Robottom credited the successful name change to a joint effort between many officials, residents and DOTD.

She indicated it was quite fitting the renaming occurred on 150th anniversary of Juneteenth — a symbolic day in American History in which news of President Abraham Lincoln’s signing of the emancipation proclamation reached the enslaved people of the South.

“As the first female and African American to serve as Parish President, this is a testament to how far we’ve come and the struggle many people have endured to get here,” Robottom said.

“Through acknowledging the efforts of Dr. Martin Luther King, Jr., we continue the fight for equality for Americans of every race and background and celebrate the shared promise of a better tomorrow.”

Lucien Gauff, Council Member at Large Division A, said “it was a humbling moment for St. John and a day that will be marked in history.”

St. John District III Council Member Lennix Madere shared he was “happy to be involved in such a great thing.”