Giving Back: Portillo paying back by directing ‘Kids on the Move’ summer camp 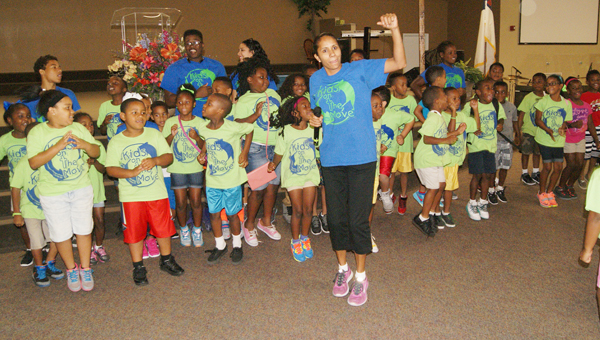 LAPLACE — When Karina Portillo was very young, she received a helping hand —and she has never forgotten it.

Portillo is the camp director for New Wine Christian Fellowship’s “Kids on the Move” Summer Camp, an eight-week summer camp for children 3-13. The camp offers financial assistance in the form of scholarships to children who come from a single-parent home earning $25,000 or less a year. The criteria includes homes where a parent has been incarcerated.

It’s no accident Portillo is in the position she’s in: this cause is near and dear to her heart. A native of Lima, Ohio, Portillo never knew her father, and at the age of 5, she lost her mother. She and her five brothers went on to be raised by their grandmother.

Between the ages of 6 and 12, she and her siblings attended a local summer camp, their fees covered by the sponsorship of a community businessman. That, she said, was a vital part of her upbringing.

“It was instrumental,” she said. “That camp was such a big part of my childhood … it taught me a lot. It was character building, and I received a lot of positive mentoring. It was a safe environment for us to learn, interact with one another and be protected from a lot of the dangers we might otherwise have been exposed to.”

Portillo, 38, has five children of her own, but on an average June day, she and her camp staff are responsible for so many more. When the “Kids on the Move” camp was established 12 years ago by New Wine Pastor Neil Bernard, 20 children attended.

This summer, the camp serves an estimated 383 children, more than 100 of those attending on scholarship.

And make no mistake, “Kids on the Move” is exactly what the name suggests; the children stay busy, and with them, so does the camp staff. Activities include swimming, arts and crafts, computer exercises, daily devotions, field trips to go on swamp tours and to “Sector 6” (a trampoline and “air sports” facility) and other games. The children are bussed to some activities, while New Wine’s multi-building facility provides a strong host for the others.

“That’s the great thing,” Portillo said. “We have the space for it. We have a gymnasium, a computer center, a snack shop … it’s very good to have, especially as hot as it is this summer.

“Our goal is to reach as many people as our means allow us to reach, and the space we have here goes a long way in that regard.”

How does Portillo maintain the energy to be a mother of five and a camp director to nearly 400?

“To be honest, it’s a task made easier because I have a passion for it,” Portillo said. “It’s something I believe God instilled in me. On top of that, I have a great team of people around me, (including) three assistant directors and 60 others. My pastor (Bernard) gives us great support.

“I don’t look at this so much as a task, but a privilege to be able to reach out and try to help people reach their potential as God intended.”

Portillo admits it can be tiring at times, but the rewards make it more than worth it.

“The smiles on their faces, seeing that they’re happy, that brings us all great joy,” Portillo said. “When we see them grown up, later on, they always talk about their time here. Everyone remembers ‘Kids on the Move.’”