‘You can see a finish coming’ 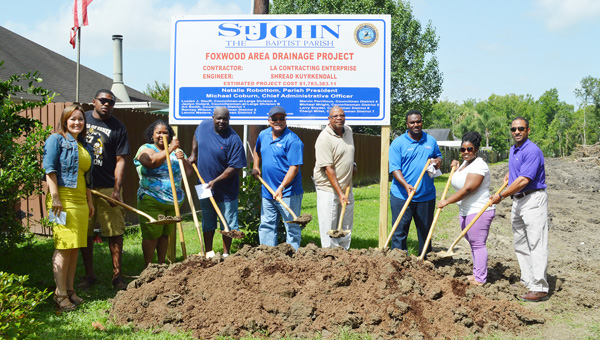 “I left Katrina to come here and be safe,” Myers said of the home he bought in 2006 in Foxwood Subdivision — the home that took in 10 inches of water in 2012 with Hurricane Isaac.

Myers joined state and local leaders Wednesday at a ribbon cutting ceremony for the levee that will soon protect Foxwood homes.

“This is perfect,” Myers said of the levee. “I’m elated that (leaders) heard us.”

The fence in Myers’ back yard runs parallel to where the levee will lie, and he said he’s been keeping track of the progress on the work.

“They’re moving quick,” he said. “You can see a finish coming.”

Once completed, the $1,783,383 levee will extend along the north side of the Foxwood Subdivision from the LaPlace Plantation Canal to the existing LaPlace Park Levee. The project also includes an internal pumping station and elevation of the entrance to Foxwood.

Officials have said the levee would protect Foxwood and the subdivisions of Sugar Ridge, New Era and The Grove.

Parish Communications Director Paige Falgoust said the levee could be completed this year if inclement weather does not delay construction.

“Foxwood Subdivision has experienced flooding since it was constructed, and this long-awaited project will alleviate that problem,” Parish President Natalie Robottom said. “I commend my team for working through the permitting, property acquisition and servitude issues to get to this point. However, success will not be accomplished until the project is completed and the residents of Foxwood are protected from recurring flooding.”

“Now we’re finally starting to see some action,” he said. “This is a big deal for everyone out here.”

District 4 Councilman Marvin Perrilloux, whose area of representation includes Foxwood Subdivision, said during 2012’s Hurricane Isaac, residents of Foxwood called him to check on their homes and loved ones still inside of homes there.

Perrilloux said because of high standing water he couldn’t access the subdivision, adding he thought to himself, “I will fight to get this project to come to pass.”

Five-year Foxwood resident Jammie Winters, whose house he shares with his wife and daughter, took on seven inches of water in Hurricane Isaac. He attended the ribbon cutting ceremony.

“I’m very excited .. very ecstatic actually,” he said of the levee. “I’m glad to see it come to fruition, and I’m looking forward to the protection.”