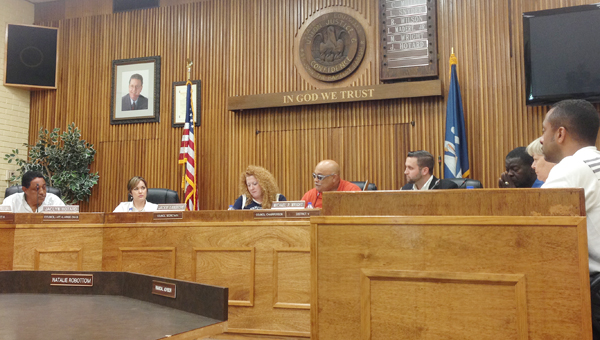 The meeting was announced just after noon Thursday, and the sole agenda item was listed as “Council investigation based on Attorney General findings and District Attorney recommendation.”

Robottom was not in attendance at the meeting, which began at 2 p.m. Friday and was immediately called into executive session.

At 3:24 p.m. the executive session ended, and the Council — with all district representatives present — unanimously voted to launch the investigations.

The investigations were detailed in two motions, each read by Council Chairman Michael Wright.

“I would like to make a motion authorizing the Chairman to seek a formal investigation by the Attorney General’s Office regarding potential violations of the local Government Budget Act and Charter as it relates to the administration implementing a proposed budget and not the properly adopted budget, including but not limited to, any and all budgetary items,” Wright stated.

“I would like to make another motion authorizing the Chairman to seek a formal expedited investigation by the Legislative Auditor into whether or not benefits previously and or currently being paid to temporary employees violates the law as an improper donation of funds and the appropriate remedy for same payment of car allowances in lieu of travel expense reimbursement, reoccurring purchase orders in lieu of long term contracts with certain vendors, expenditures for certain advertisements, expenditures for certain mail outs, the payment of a holiday pay to employees for holidays not granted by the Parish Council as required, the use of temporary agency contract labor to fill full­time positions designated for Civil Service personnel, the continued payment of benefits to any ineligible employee, the manner in which budgeted funds for fiscal years 2013, 2014 and 2015 were transferred between departments for salaries and other expenditures,” Wright said.

After passing both motions, the Council adjourned the meeting.

After the meeting, Councilwoman at Large Division B Jaclyn Hotard said the Council’s legal representatives advised Council members not to discuss any pending investigation.

Following the meeting, Robottom released a statement saying it is obvious there was a lack of forethought and guidance in this process, adding it is a political ploy to distract the voters.

“When you’ve done nothing and are doing nothing, it’s easy to criticize the work of others,” she said. “I welcome an independent investigation by professionals trained in this process and am confident that the findings will expose all who have failed to do their jobs in representing the residents of this parish. In the meantime, my staff and I will follow the will of the people and press on with continued service.

“The fact that the same policies and procedures have been in place for years and only now being questioned four months before the election calls into question their validity.”

The Council called for an internal investigation into Robottom’s administrative practices at the June 9 meeting after opinions by the St. John District Attorney and Attorney General regarding multiple requests for decisions were read into public record by Assistant District Attorney E. Jeffrey Perilloux.

Robottom held a press conference June 11, in which she said she has “absolutely no concern” about the Council’s investigation into her management practices resulting in any criminal charges.