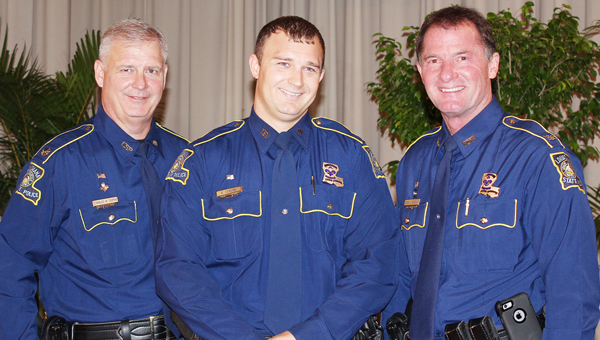 When Louisiana State Police personnel gathered last month to honor their own for extraordinary efforts over the past year, some special awards were given for life-saving efforts.

Examples of bravery, dedication and exceptional work ethic were common themes throughout the ceremony, which took place at the Louisiana State Police Training Academy Auditorium in Baton Rouge.

Included in the celebration were recognitions of the “Lifesaving Award,” whose winners included a couple of troopers who do their work in the River Parishes.

The call came in at 2:30 a.m. Oct. 20 from a motorist who witnessed a woman fall over the bridge rail.

Trooper Blake Lemoine, a State Police veteran of approximately eight years, was on duty that evening and noticed an unoccupied vehicle on the I-10 westbound lane at mile marker 218.8 over the Bonnet Carre’ Spillway.

Upon examining the vehicle, Lemoine noticed the car’s engine was cold.

He looked over the bridge and saw a female in the water below.

“She was actually face down in the water,” he said. “It was difficult for me to tell if she was still breathing. I started yelling for her to see if she would respond. After a few seconds, she took her head out of the water, took a breath and went back down under the water.”

Although she was only in about 18 inches of water, Lemoine could tell the victim was stuck in the muck and disoriented.

“She kept craning her neck up to get her face out of the water and she would go back down because she was sunk up to her elbows in the mud,” he said. “My first reaction was to take my gear off and jump in after her.”

As he was about to launch himself over the side of the bridge, another trooper arrived and pointed out debris in the water that would have made that particular jump extremely dangerous.

The troopers eventually found a safe spot for jumping and determined Lemoine would do so if it appeared the victim stopped lifting her head out of the water.

Fortunately, a LSP lieutenant brought a rope ladder to the scene that Lemoine used to get down to the bank, jump in the water next to the victim and pull her to safety.

“From there, they threw blankets down, and I did whatever I could to keep her warm and from not going into anymore shock,” Lemoine said. “It took a couple of hours, and we ended up getting a Causeway boom truck. The fire department lowered a basket down, and we were able to secure her in the basket and use the boom truck to pull her back over the bridge rail.”

Surprisingly, Lemoine said the victim ended up OK despite coming very close to drowning. She took in a lot of water, was hypothermic and in shock.

“When I was speaking to her to keep her calm and keep her talking, I asked her what happened,” he said. “She told me she was upset, talking to somebody on the phone, dropped the phone and was trying to catch it and ended up falling over the bridge.”

State Police Sgt. Troy Leonard was eating dinner with his wife Nov. 18 when it became apparent he needed to intervene or something tragic may occur.

The veteran law enforcement officer of 29 years works in Troop C, which includes portions of St. John the Baptist and St. James Parishes. He was eating at Texas Roadhouse in Houma when he heard a guy choking over his shoulder.

“I looked at my wife, and she said, ‘it looks like he is choking,’” Leonard said. “A friend of (the man choking) wanted to do the Heimlich maneuver but he didn’t know how to do it. I said, ‘look, I know how to do it.’ It took two tries. On the second try, a large piece of meat dislodged from his throat, and it got him breathing again.”

Leonard said he could see the victim turning blue and losing color in his face because oxygen was not traveling to that part of his body.

Leonard said he picked up the Heimlich technique over the years watching demonstrations and reading articles.

“The place was packed, but nobody but me got up to help that man,” Leonard said. “It is disappointing. That is one of the things that drives me in my job: to be in the right place at the right time to help people out. It’s not all about having a gun in your hand or on your side with a badge. That doesn’t make you a good policeman.”

Leonard said the Louisiana State Police awards ceremony was nice, adding it was something Troopers should do more.

“There should be more awards given every year,” he said. “I think it is one of those things that helps motivate the guys and keeps team morale up. It’s nice to be recognized. I’ve always tried to recognize those guys that have worked with me.”

Lemoine said it was great to get recognized for his effort, but it is not something Troopers see as extraordinary.

“That is something that we all signed up for,” he said. “It is something we decided we were going to go and do. To get to do that is great, getting recognized for it is lagniappe.

“Doing this job, you get to see a lot of things people don’t normally get to see, but there is a lot of paperwork and dealing with the public. To get to do something that is all around positive and looks great to us, it’s awesome to be part of that.”