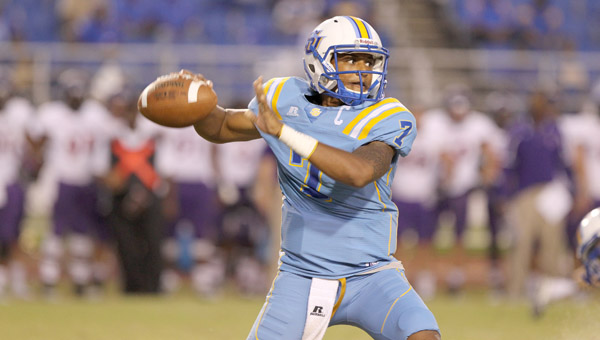 BATON ROUGE — Two weeks before what was perhaps the greatest victory in the athletic career of true freshman Southern University quarterback Austin Howard, he also suffered one of his greatest personal losses.

But when it comes to Howard’s MVP performance in the Bayou Classic, he says those two things went hand-in-hand.

In November 2014, Juan Joseph was tragically shot and killed outside of a Baton Rouge nightclub. Joseph was an assistant coach with the West St. John football team and someone Howard credits as a longtime mentor.

“He was my role model,” Howard said.

The former West St. John star said he sat in his team’s locker room ten minutes before the Jaguars were to take the field of the Mercedes-Benz Superdome to face Grambling State when he received more than a bit of divine inspiration.

“He was always there for me,” Howard said. “He’d be at the game, or he’d listen on the radio or watch on the TV, and we’d talk afterwards. It was very emotional for me, because it was my first game without him physically being there.

“But that’s when he spoke to me. He told me, ‘I haven’t missed one yet, and I won’t miss today.’ I went out there and played for him. I dedicated it to him.”

It was a performance that assuredly made Joseph, and many others, proud. In a Bayou Classic that decided the SWAC West Division championship, Howard, a true freshman, passed for 258 yards and three touchdowns en route to earning the game’s MVP honors in a 52-45 Southern victory. The Jaguars needed that kind of game from Howard on a day the two teams combined for 995 yards of offense.

The collegiate game was a new stage for Howard, but his circumstances weren’t all that unfamiliar. When Howard was a freshman at West St. John, he earned the starting quarterback role for coach Robert Valdez, succeeding graduated Rams passer Dray Joseph, the brother of Juan Joseph. At Southern, Howard earned the starting job as a freshman again — and again, Joseph preceded him, this time helping Howard as an assistant coach with the Jaguars after the latter set numerous school passing records in his playing tenure.

“The biggest adjustment for me was the speed of the game,” Howard said. “It’s a long fight from the beginning of the season to the end. But by the end, things slowed down for me. I learned a lot about managing my time, balancing practice, classes and meetings.”

When Southern coach Dawson Odoms named Howard the team’s starting, and sole, quarterback a few games into the season — he had split time for the first three games — the freshman said he was ready to seize the opportunity.

“I just told God, ‘thank you for presenting me with this opportunity.’ From there, I told myself that it’s my time to shine now.”

Howard passed for 2,334 yards, 17 touchdowns and 8 interceptions. He also rushed for four touchdowns. He earned honors as the SWAC Freshman of the Year and Boxtorow.com Rookie of the Year. He was a finalist for the Jerry Rice Award.

He said it didn’t take long to establish rapport with his teammates.

“I give those guys the credit,” Howard said. “They made it easy for me on the field and off. They really embraced me. Before I went out for my first start, they told me to just go out and play my game, and from there I handled business.”

Dray Joseph’s presence also helped him find a comfort zone quickly, as did the similarity of Southern’s offense to that he ran at West St. John under Valdez. a Jaguars alum.

“I’ve been around Dray, his dad and Juan my entire life,” Howard said. “I was very fortunate to walk into a situation like that … the system was very, very similar to what we ran in high school. Coach Valdez told me they ran a similar offense and he was right. It definitely made things smoother.”

Howard won’t offer any predictions for the season to come — “I won’t spoil it,” he quipped — but the Jaguars might just build on the success of a season that saw them go 9-4 and capture a second consecutive SWAC West Division title. Southern averaged 35.6 points per game from Howard’s first start through the end of the season, the Jaguars going 8-2 over that span after a 1-2 start.

Already, however, he’s become a strong ambassador for and a favorite son of Edgard.

“I have a big support system back home,” Howard said. “I know a lot of people have big expectations for me, my mom, my dad … I want to try and satisfy them all.”