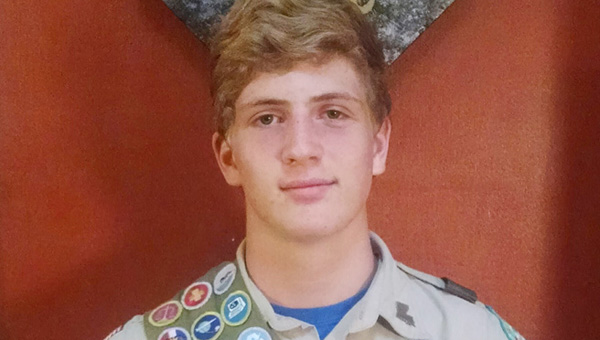 LAPLACE — Noah Bork said he decided when he was 10 years old that he wanted to be an Eagle Scout, which gave him a timeline of eight years to fulfill all of the requirements.

Noah Bork decided when he was 10 he wanted to be an Eagle Scout. At 15, he is well on his way to that goal.

For his project, Noah organized an effort to pressure wash and restripe the parking lot at Ascension of Our Lord Catholic Church in LaPlace, where he serves as an usher.

“I’ve been with the church for a few years and I approached a KC to see if anything needed to be done to the church or school, and they recommended I do the parking lot,” Noah said, adding the lessons he learned from his years of scouting helped with budgeting and organizing the project.

Armed with donations from Fisher’s Ace Hardware, Home Depot, Subway and family and friends, he gathered Scout members and people he knew to pull off the project.

Noah, the son of Rich and Bernie Bork, just wrapped up his freshman year at St. Charles Catholic high School. He plays football at SCC, where he said his favorite subject to study is history.

He is a mainstay on the school’s Alpha Honor Roll, a distinction for students who make more As than Bs.

“At SCC they really get you ready for life beyond school,” Noah said, adding Coach Frank Monica has become a notable mentor in his life.

Noah became a Cub Scout at the age of 7 in Destrehan’s Troop 317, and later moved into Boy Scouts at the age of 10. In the past he has served as a troop leader, and currently he is junior assistant scout master.

Once Noah completes his Court of Honor — which he said he hopes to do by December — he’ll officially be an Eagle Scout.

“I’m one of the youngest in my troop to do it,” he said, adding through scouting he has been able to travel around the country and meet lots of new people.

“It’s been a great experience,” he said. “Don’t pass it up if you have a chance. It’ll really change your life.”

Noah’s father Rich said everyone is extremely proud of Noah for completing Eagle Scout requirements at such a young age.