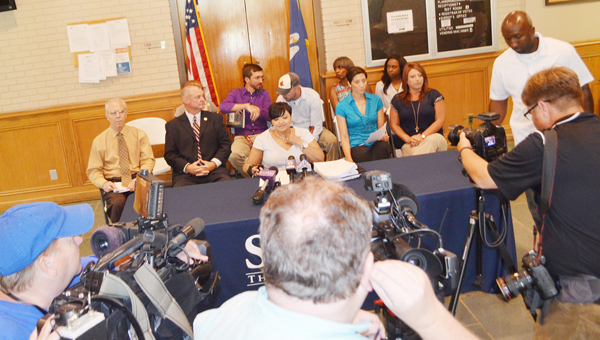 Media members from St. John the Baptist Parish and the New Orleans metro region gather Thursday for a press conference called by Parish President Natalie Robottom following the Parish Council’s call for an investigation into her policies with temporary employees. (Stephen Hemelt/L’OBSERVATEUR)

LAPLACE — Legal opinions and Council action at Tuesday night’s St. John the Baptist Parish Council meeting proved to be an accelerant in the smoldering relationship between Parish President Natalie Robottom and Council members.

The Council called for an internal investigation into Robottom’s administrative practices at the meeting after opinions by the St. John District Attorney and Attorney General regarding multiple requests for decisions were read into public record by Assistant District Attorney E. Jeffrey Perilloux.

Robottom held a press conference Thursday, in which she said she has “absolutely no concern” about the Council’s investigation into her management practices resulting in any criminal charges.

Perilloux read at the Council meeting, as part of the four-page opinion with 15 findings, that “under the existing employment circumstances with the parish administration, it is this office’s opinion that the parish is currently operating in violation of both state law and the parish Charter in providing certain benefits, including retirement and vacation pay, to temporary employees who are not eligible for the same. Additionally, there are certain temporary employees who have been hired to permanent positions, which were not created by the parish Council under the provisions … of the Charter.

“There is also significant concern as to whether the Parish Administration is following the proper Civil Service Rules,” he said, adding the version of the rules adopted by the Civil Service Board in late 2014 has never been adopted by the Council, which is required by law. “To the extent that the Parish Administration has either implemented, or is following, the policies from the non-Council adopted version, it is the opinion of this office that such conduct is in direct violation of the law and potentially amounts to malfeasance.”

The legal opinion also said Robottom’s administration has granted paid holidays “in addition to those they are legally entitled to.”

Robottom was not present at the Council meeting, but said in a prepared statement Tuesday night she had been out of the office for over a week due to a recent injury.

Parish President Natalie Robottom references the policy she says the administration is following.

“First and foremost, let me say that any accusations of malfeasance in office related to hiring practices or management of the parish workforce outside of adopted Civil Service Rules as asserted by Council members, the District Attorney’s Office and anyone else are blatantly false. However, after careful review of the opinions and recommendations, it is clear that they are inconsistent with those rendered by the AG’s Office, existing policies and procedures and previous opinions rendered by the District Attorney’s Office.

“Although clarification on many of these items has been requested by my office for over a year, the lack of professionalism in adding this to the Council agenda with a last minute amendment with full knowledge that I would not be in attendance due to an injury is extremely disappointing and a sign of cowardice.”

The parish’s Home Rule Charter gives the Council authority to “make investigation of Parish affairs and make inquiries into the conduct of any department, office, agency or special district of the Parish, including the investigation of the accounts, records and transactions of the department, office, agency or special district; and for the purpose of investigation, subpoena witnesses, administer oaths, take testimony and require the production of books, papers and other evidence.”

Wright said “at the conclusion of this investigation, I hope we can move forward acting in accordance with the parish’s Home Rule Charter. Residents need to stay informed and up to date to continue to monitor their vested interest in our parish.”

Recommendations from the DA’s opinion — which totaled eight — suggest the parish should adopt a personnel rule for defining temporary employees and immediately terminate any retirement benefits or vacation pay being given to temporary employees.

Robottom should seek Council approval, the opinion said, to declare any future holidays or half-day holidays.

“I agree that all employees are subject to policies and rules adopted by the parish Council,” Robottom said in Thursday’s press conference. “That is why we are following the policy adopted as revised in 2008 and included in the revised employee handbook in 2010 granting non-classified employees, specifically by name special assistants, the benefits they currently receive.”

She said the policy has been in place and implemented as adopted since 2008 and all parish departments are functioning with Council-affirmed department heads.

“Temporary in St. John the Baptist Parish is as long as the Council continues to adopt ordinances that allow these people to remain employed,” Robottom said.

The contention with temporary employees and special assistants boiled over earlier this year when Robottom named Blake Fogleman as special assistant to the parish president, “assigned as director of utilities to replace (Director) Virgil Rayneri,” a press release stated.

In January Robottom announced the appointment of Laverne Saulny as special assistant to the parish president assigned to economic development.

“Saulny will serve as acting director in the absence of (Director) Torri Buckles, who is on extended medical leave,” a press release stated.

The Council held a special meeting in February to vote on a resolution — which passed — to enforce an immediate hiring freeze on new parish employees after Robottom’s appointment of the two special assistants — which do not require Council approval — in January.

Robottom said Thursday the “introduction of an ordinance attempting to define ‘temporary’ 30 years after the Charter was adopted and applying it retroactively is suspect,” adding the practice of appointing special assistants has existed since 2004 and did not begin with her administration.

“The assertion that special assistants do not qualify for retirement benefits is in direct conflict with adopted policy and practice dating back to 2004,” she said.

Robottom said she has never declared holidays outside of what was legally granted, “however in keeping with the practice of previous administrations, on occasion the parish offices were closed early prior to holidays, typically at the request of other governmental departments and Council members.”

Robottom said she has “no problem relinquishing that authority.”

“The DA’s concern about which Civil Service manual or policies are being implemented by my administration is mind-boggling as two of her assistant district attorneys attend every Civil Service Board meeting and two meet with me and my staff bi-weekly and have been directing me and my Human Resources director on use of the appropriate manual,” she said. “Any concern here is unfounded — specifically the assertion of malfeasance.”

Robottom closed the conference by calling into question the motives of Council members and others.

“Keep in mind this is an election season and when you have individuals who lack relevance and a record of achievement, yet are running for election or re-election, they will do anything to gain attention,” she said. “My record of success and achievement speaks for itself.”

St. John Parish District Attorney Bridget Dinvaut released a statement Thursday afternoon in response to Robottom’s press conference, in which she said she hopes her office’s opinion “will help to dispose of divisive issues that have plagued parish government for the past few years.

“Our opinion was only rendered after substantial review and research of all relevant information, laws and both recent and previous Attorney General advisory opinions,” Dinvaut said.

“We encourage President Robottom and her administrative staff to work in the spirit of cooperation with the Parish Council to serve the best interests of the citizens of St. John the Baptist Parish.” 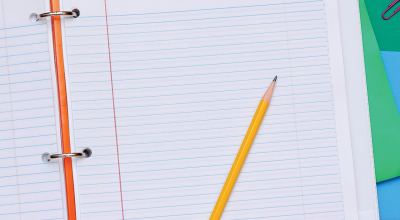 Back to School supplies available for West Bank students 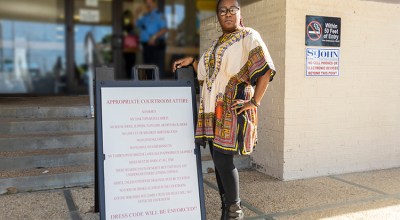