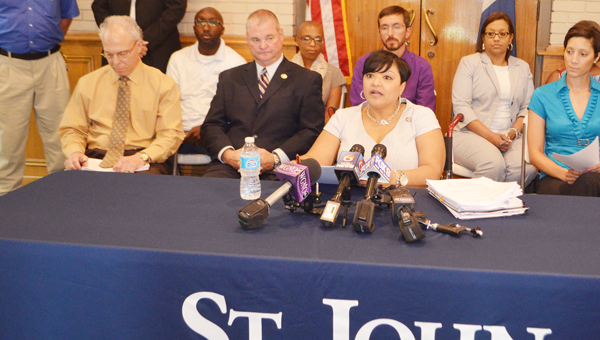 LAPLACE — St. John the Baptist Parish President Natalie Robottom said she and her administration have followed policy adopted by the Parish Council in hiring and providing benefits to temporary employees.

Robottom said she has not created jobs without parish approval, does not fear criminal charges and has not changed any employees’ benefits schedules relating to charges levied by the Parish Council and St. John Parish District Attorney’s Office implying Robottom committed violations of state law and parish charter in regards to temporary employees hired to permanent positions and hiring department heads that were not Council-confirmed.

Robottom made her strongest statements to date at a press conference today (June 11) in LaPlace in front of the Parish Council meeting room.

“Any accusations of malfeasance in office relating to hiring practices or management of the parish’s workforce outside of the adopted civil service rules as asserted by Council members, the district attorney’s office or anyone else are blatantly false,” she said. “I have the authority to hire people on a temporary basis.”

Robottom said as long as funding is available, the parish president has the authority to make temporary hires, and policy approved by this Parish Council and previous ones directs those employees to receive certain vacation and retirement benefits.

On Tuesday, the Parish Council called for Robottom to be investigated.

“I’m following the policy that was adopted,” she said. “They are investigating me, because they thought there was no policy.

“The policy that I am following that was adopted and revised in 2008 — I did not hire every individual who is receiving those benefits. The practice of implementing an adopted policy, as I have been directed by the AG’s office and the district attorney’s office, is what is taking place.”

Robottom said she has not been asked any direct questions from Parish Council members or the District Attorney’s Office relating to their concerns, adding she feels much of the controversy created is politically motivated, as the parish president’s seat and those of the parish council are open for election later this year.