With a little guidance from dad, sisters excel in face of adversity 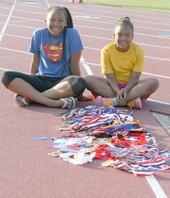 Anya, left, and Aja Creecy proudly display the mountain of medals they’ve won in athletic competition over the past few years.

LAPLACE — Eleven-year-old Anya Creecy paused when asked how Hurricane Isaac had affected her extracurricular activities before acknowledging she couldn’t do as much as she used to, something also true for her 8-year-old sister Aja.

Those words are impressive when considering what the sisters have accomplished over the past few years.

The Creecy sisters have earned national recognition in track and field competition, while excelling in the classroom and in other sports, despite dealing with the distraction of a day-to-day reality still altered by a storm that has impacted the lives of so many. They currently live in a two-bedroom home housing eight people — a bed for the night is not always a promise.

“Who’s on the bed and who’s on the floor is a night-to-night thing,” said Mark Creecy, the girls’ father. “Our (original) home took a lot of damage, and we’ve been bouncing around between different places since then.

“In between all of that, I’m really proud of what they’ve been able to accomplish.”

Anya has ranked as high as third nationally in the javelin and fourth as a hurdler in her age group, while also earning recognition in the shotput. She also plays volleyball, soccer and basketball — the latter sport saw her earn All-Star recognition playing for St. John Parish’s boys recreation team.

“At first, I’d watch those games and, you know, when there’s a girl on the team sometimes the guys are slow to pass her the ball,” Creecy said. “But as time went on, they started to trust her. She got some confidence and made her shots.

“Then she started blocking shots. She got six in one game … there was one where she blocked it hard out of bounds and it got an ‘Oooh.’ She actually felt bad about it because she didn’t want to show anyone up. It’s just who she is.”

What her father is perhaps most proud of, though, is Anya’s work in the classroom. At LaPlace Elementary, she was nominated as her class’ student of the year in her fifth grade year, and has maintained a 3.8 grade point average throughout her tenure at the school.

Not to be outdone, Aja has earned a large spotlight as well. She set a national record in her age group in the javelin and has placed highly in national shot put competitions. In each of the past three years, she’s finished as a runner-up in national club track and field events in her age group. She’s also been quickly developing as a soccer player, highlighted by a nine-goal game.

In the classroom, Aja has maintained a 3.6 grade point average.

In his college days, Mark Creecy specialized in throwing events, a skill he’s passed on to his daughters.

He’s also introduced hurdling to his girls, as he notes an accomplished hurdler can draw a great deal of attention from recruiters at the college level.

“You have to be a truly great sprinter to get their attention, because there are so many of them out there,” he said. “But if you learn great technique as a jumper, a good sprinter can become a hot commodity.”

Anya said the hurdles are, at times, nerve-wracking.

“I feel it more with the hurdles because it’s newer to me and I really don’t want to mess up,” she said. “But for discus and shotput, it’s easy for me. I’ve been doing both for a long time. I just began hurdles last year.”

She said scheduling everything can be difficult at times.

“You’ll have games at the same times as one another or the same time as practice,” she said. “You just have to deal with it in advance. Sometimes it works itself out.”

Aja said she keeps busy for a simple reason.

Unsurprisingly, she said the javelin is her favorite sport to compete in. Even at a young age, she shows a passion for perfecting her craft.

Their father said it comes down to determination.

“Both really get it when it comes to their practice habits,” he said.

“Their work ethic shows they want to excel. They practice hard, ask questions and really study their craft.

“Sometimes I’m scrolling through these websites that rank (track and field competitors), and you see girls from Colorado, Texas, New Jersey, and then you see their names and I kind of realize, ‘Wow, they’re not too bad at this. They’re really good.’ It just makes me so, so proud.”

Townsend Homes off to hot start