Townsend Homes off to hot start 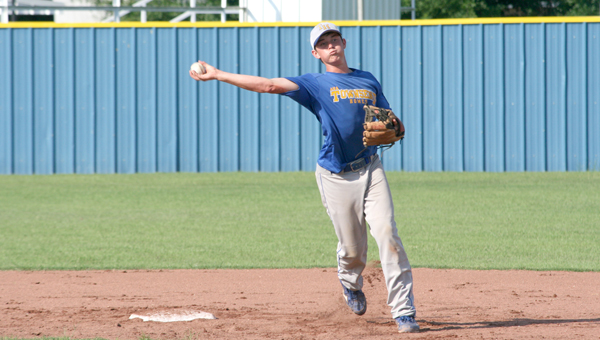 Justin Ory and his Townsend Homes teammates haven’t lost a game this summer.

LAPLACE — St. Charles Catholic will bring seven starters back next season from its Class 3A quarterfinalist in 2015, and the players’ start to the summer provides what looks like a  preview of what a potentially very strong squad will look like.

The Comets are under way in American Legion play under the banner of Townsend Homes — in Legion baseball, each school participating plays under the name of a sponsor.

Townsend Homes has picked up five wins in its first five games, with victories over Hannan, Destrehan, Hahnville, Lutcher and John Ehret-based teams by a combined margin of 35-5.

It continued a trend of hot play in the second half of the SCC prep season.  The Comets went 12-3 over their final 15 games, allowing two runs or less in 14 consecutive games prior to their 7-6 quarterfinal loss at Iowa.

So far this summer, Townsend Homes has allowed three runs or less in all five games, including three shutouts.

“We’ve kind of picked up where we left off,” Townsend Homes coach Wayne Stein said.

“We’ve got a lot of our guys back. Obviously, when you talk about the seniors we’re losing in Austin Weber and Eian Mitchell, we’re looking for guys to step up to fill some sizable losses in those two. But the attitude we always have is next man up.

“I like what I’m seeing. When it comes to summer baseball, its about who wants to be there. We’ve got players who come ready to get better each day and its refreshing to be around.”

The biggest question Stein said his team must answer is who will emerge behind Zack Roussel in the pitching rotation. Roussel, a right-hander broke out as a junior last season and provided a strong one-two punch with Weber. He pitched 68 innings and finished with a 1.33 ERA and a 6-3 record.

He will be the staff’s ace, but the spots behind him are up for grabs. Austin’s younger brother, Zach, figures to play a prominent role. Stein said he plans to limit his innings this summer — “we know what Zach can do,” he said — but there are other experienced pitchers on the staff in seniors Nick Scioneaux and Jacob Jensen with a chance to earn an increased role.

Juniors Brennan Gilberti  and Evan Pfister and sophomore Lloyd Nash are also in the mix.

“What those younger guys do is key, too, because we’ve got four guys who will be seniors that we’re counting on, pitching wise,” Stein said.

Retif is perineally one of the top teams competing for Legion honors each summer, and Stein said he knows if his team is to remain undefeated, it will have its stiffest challenge to date ahead of it. Retif is not far removed from winning the Legion state championship in 2013.

“That’s the kind of team we want to play, because it only makes us better,” Stein said.

Meanwhile, the Deanie’s matchup is a notable challenge for Stein on a personal level. Deanie’s is coached by Nick Monica, the son of SCC football coach Frank Monica and someone who Stein counts among his closest friends.

“You know, from that standpoint it’s always super competitive because it’s like brothers competing. You never want to lose,” Stein said. “For us, those games have some added meaning. Whenever we play a Rummel, a Jesuit, anyone where you’ll see a kid leave our area and go to those schools, it’s a chance to show everyone that there’s a pretty good thing going on right here in their backyard.

“We compete in Legion because it’s basically the Catholic League. It’s a chance to get better. If we lose every game, it’s not the end of the world. If we win every game, we don’t look at it as if we’ve made it. It’s evaluation, but at the same time, you want to win.”