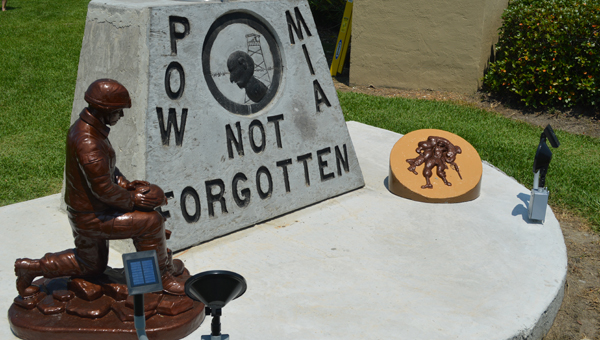 A Prisoners of War/Missing in Action memorial stands in front of the River Forest Subdivision in LaPlace.

LAPLACE — It all started with a homeowners association meeting late last year, and now a Prisoners of War/Missing in Action memorial stands in front of the River Forest Subdivision in LaPlace.

Bennett Robichaux, known as Mr. Benny to many throughout the community, approached board members at a November River Forest Homeowners Association meeting and asked if he could fly a flag in front of the subdivision on a light pole after he said he noticed something that bothered him — the lack of American flags flying in front of homes in River Forest Subdivision.

“I was riding around the subdivision,” he said, “and the amount of flags I’d see I could count on one hand.”

Robichaux said with over 400 homes in the subdivision, he thought the number of flags flying should be higher, so he had the idea to fly a flag in front of the subdivision.

“After I did that I found a few flags popping up around the neighborhood,” he said, adding from there he asked the homeowners association to fund a proper flagpole.

The board agreed, and “ideas kept evolving,” Robichaux said chuckling.

First he planned to pour a slab for the pole, but after thinking about it he thought the display needed a proper pedestal as well. On a notion that a bare slab and pedestal might look plain, Robichaux decided to “do something that’ll pop and get people’s attention.”

The result of Robichaux’s work is the memorial that was dedicated Saturday, the 71st anniversary of D-Day. He served as master of ceremonies for the event, where he spoke of all soldiers.

“This great flag they fight and die under, that is being raised here today, is a living representative of all of our rights and liberties, guaranteed under the constitution of the United States of America,” he said. “I highly recommend we all honor it with a flag pole or house staff to fly it on, just as a way to show your pride and support for all those that serve this great country today. They need to know you have their backs with this type of support.”

Robichaux publicly challenged all St. John the Baptist Parish homeowners associations to install a memorial of their own to the fallen military.

“When (soldiers) have served their time, a great number of them keep serving us today as citizen soldiers, doing the work of policemen, firemen and first responders, along with the many veterans organizations that are working in our communities,” he said.

Robichaux, a World War II Army veteran, fashioned the majority of the memorial himself by carving, painting and pouring cement. He said he took up woodworking over the last few years.

“We must continue to educate our youth on what it means to fly an American flag,” Wright said. “The flag is a symbol of hope, a symbol of freedom and a reflection of the men and women who have died serving and those currently serving to protect those very securities we have today.”

Hotard said there is “no better place or greater country that we could live than the United States of America.”

Robichaux said the memorial is a culmination of work and donations from many people, including American Legion Post 383 members who donated the American Flag, and LaPlace Concrete, which donated the concrete used in the memorial.

“You have done your community an excellent service today,” Tregre told the crowd of River Forest residents and others who gathered for the ceremony. 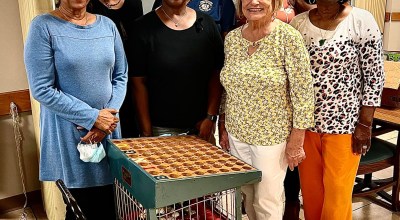