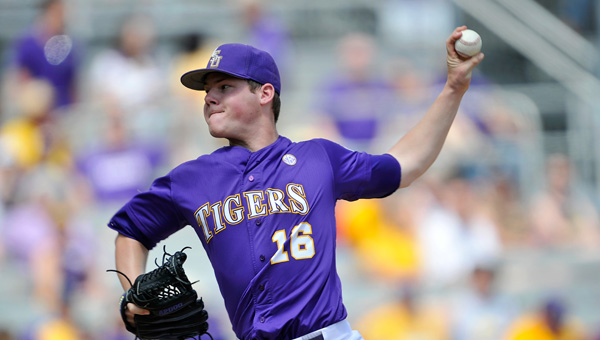 LSU’s Jared Poche delivers to home plate during his sophomore season with the team. (Photo submitted)

BATON ROUGE — LSU lefthander Jared Poche was coming off a rare rough outing when he took the hill Monday in regional action against North Carolina-Wilmington, and the Tigers needed the former Lutcher Bulldogs star to bounce back: a victory meant the team would advance to this weekend’s Super Regional.

Count Lutcher coach Davey Clement among those who weren’t surprised at Poche’s response: 8.2 innings of six hit, shut out ball.Poche improved to 8-1 and catapulted LSU into the next round of play.

“In high school, Jared met every challenge he ever had,” said Clement, who won the Class 4A state championship with Poche as his staff ace in 2013.

“I think he hates failure more than he likes success.

“He’s a guy that, when Jared struggles or has a tough outing, he just can’t wait to get back on the mound.

“You’ll never know if he’s up nine or down nine by the way he’s competing. He’s a bulldog.”

Clement didn’t seem to intend a pun with his last statement, but it’s true on multiple levels nonetheless: Poche was, indeed, one of the most memorable and decorated athletes to come through the Bulldogs’ baseball program, a two-time All-State hurler who wrapped up his prep career by being named Louisiana’s Mr. Baseball after notching  Class 4A Player of the Year and 4A championship game MVP honors in 2013. He went undefeated that season at 13-0 with a 0.61 ERA; he was 24-1 over his last two seasons at the school.

To say Poche has hit the ground running since reaching LSU would be an understatement.

Poche earned freshman All-American status from numerous publications, was named to the SEC All-Tournament team and was named Louisiana Freshman of the Year.

“He was dominant in high school,” Clement said. “It’s incredible to see him now. You always knew he’d have great success because of the type of kid he was and the drive that he has. I know how hard it is to pitch in the SEC. I’m not surprised (at his quick success), but at the same time I can appreciate the level of competition he’s excelling against.”

This season, Poche has put together a 3.05 ERA and has again emerged as one of the Tigers’ most valuable starters. He could start Game Two of the Super Regional’s best of three series with Louisiana-Lafayette, which will be played Sunday; there was uncertainty over his availability at press time after he threw 121 pitches in Monday’s victory. Game One of the series is at 7 p.m. tonight at LSU’s Alex Box Stadium.

“Playing on a great team like this, I know even when I’m not at my best, we’ve got guys who can pick me up. It gives you a lot of confidence.”

Poche said he feels his firm control of multiple pitches has been the biggest key to his quick transition to the collegiate level, crediting pitching coach Alan Dunn for helping keep his mechanics consistent.

“He helped me a ton with the transition to this level,” Poche said.

Against UNC-Wilmington, the second seed in last weekend’s regional, Poche said he went back to the basics after he lasted just an inning in his previous start.

“It’s a part of baseball,” Poche said. “Unfortunately, you can’t be your absolute best every time out. I stuck to the same gameplan we’ve used all year (against UNC-Wilmington).

“I had a bit of a break between starts, but I didn’t change much. Just go out and be a good competitor.”

He was back in Lutcher this week, where he helped Clement and the Bulldogs hold their annual summer baseball camp.

“It’s a great feeling whenever I’m back home,” he said.

“I see so many people, friends and family who are supporting me, old high school teammates. I love it.”

Poche wasn’t the only Lutcher Bulldog pitching in last weekend’s regional, as Tulane’s Corey Merrill picked up a win in the Green Wave’s victory over Lehigh.

Merrill has emerged as a go-to pitcher for Tulane.

Poche and Merrill were teammates on the 2013 LHS championship squad, Merrill pitching the state semifinal and Poche the final.

“I got to watch most of his start,” Poche said.

“I got to see his dad who was there watching. It’s a great thing and it’s neat that we’re both doing well (at the college level). It was fun to see him.”

Clement said he’s just as invested in seeing his former players succeed now as he was when he coached them with the Bulldogs.

“My wife thinks I’m nuts sometimes,” Clement laughed. “It’ll be the first inning and one of them will throw a ball and I’m pacing up and down.

“I just want them to be so good. If Corey walks a guy, I still want to run out there and talk to him on the mound. With Jared, it’s the same way.”