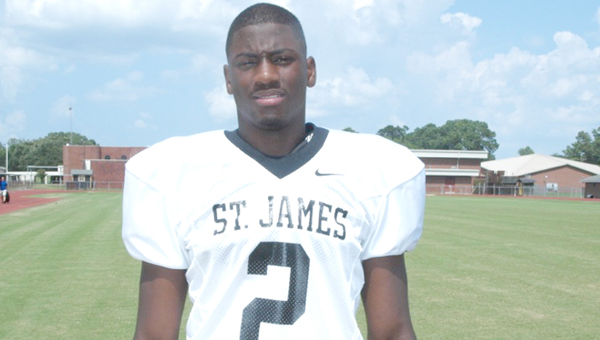 ST. JAMES — When St. James football coach Dwain Jenkins saw his quarterback tackled from behind in the Wildcats’ spring game at Chalmette last week, he feared for the worst.

Those fears were confirmed this week: star passer and major Division I recruit Lowell Narcisse will miss his entire junior year of athletics due to a torn ACL.

“It was one of those things where, when you’ve been around athletics for a long time, you got a sinking feeling from,” Jenkins said. “It wasn’t a malicious thing. Lowell got past the defender, and their guy tried to make a play. It ended in a horsecollar tackle. It leaves the knee really vulnerable … it’s why it was made illegal. Unfortunately, it’s just part of the game.”

Narcisse confirmed the severity of his injury on Twitter Tuesday, saying through the site, “It might not be what everybody wants to hear, (but) I went to get my MRI this morning … Yes, my ACL is torn. I won’t be playing any sports this year. I will be a part of my Wildcat family and still will play a leadership role for my team … Thanks everyone who kept me in their thoughts and prayers … I love Wildcat Nation. I’ll be back soon!”

In his first two seasons as St. James quarterback, Narcisse has compiled monstrous statistics. He’s passed for 5,134 yards, 58 touchdowns and 22 interceptions over that span, while adding 2,039 yards and 30 touchdowns on the ground.

Narcisse has been the quarterback of the Wildcats throughout Jenkins’ full two-year tenure as SJH coach. St. James has reached the Class 2A quarterfinals in consecutive seasons, after the Wildcats went winless over the 2011 and 2012 seasons.

“It will have a huge impact,” Jenkins said. “The one silver lining for us is it happened now and not a week or two into the season. We know he’s not going to be walking through that door and everyone else has to step up.

“You look at the landscape of football now, and it’s a quarterback-driven sport. When you have one, you have a great chance of success. He’ll be a major loss to overcome.”

While Jenkins acknowledged the importance of Narcisse to his team’s prospects, the coach left no room for negotiation in the quarterback’s availability for the upcoming season: he will sit out and rehab.

“It’s not worth risking his future,” Jenkins said. “I want to be cautious with Lowell. There’s going to be no pressure to get him back on the field before August of 2016. We all want him to go on to have the successful college career he’s destined to have.”

Despite being just a sophomore, Narcisse has offers nationwide, including LSU and Auburn. Those schools have told Narcisse they will honor those offers, as have others.

Jenkins said that fact has helped keep his quarterback in good spirits despite the injury.

“You know, for a lot of players, that junior year is the one where they get that attention from the next level,” Jenkins said. “It’s an important one. He’s fortunate in that he’s already got offers from Arizona State to North Carolina.”

“Basically all of them have told him they’re not backing off their recruitment of him.

“I think the support of athletes and coaches in the region and throughout the country has meant a lot to him.

“Now, it’s a matter of him understanding that during this time out, use it to continue to learn and get better, and come back bigger, faster and stronger next year.”