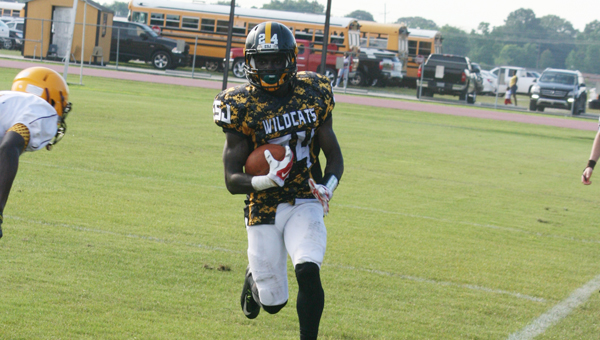 Dontrell Allen takes the ball up the sideline during Friday’s spring game. Allen is converting to running back from defensive back. (Ryan Arena/L’OBSERVATEUR)

LAPLACE — In some respects, fans seeking insight into what new East St. John coach Alden Foster’s Wildcats football team will look like this fall will have to wait a bit longer; the Wildcats hosted visiting McDonogh No. 35 in spring scrimmage action Friday, but were without their first and second team quarterbacks.

Still, while not without hiccups, East St. John clearly showed it will once again have some major playmakers at its disposal, including tailback Dontrell Allen and wide receiver Damonte Coxie.

“We had nine days to really get the ball rolling,” Foster said. “We are learning the kids and they are learning us. Game planning will make a difference in the future. We had an eighth grade and a ninth grade quarterback out there (Friday) and we scored four times. We made mistakes, but it’s all correctible.”

The scrimmage was structured where each team alternated possession, with the first and second team offenses getting a set allotment of plays to run against the corresponding defensive unit. Then the teams played a 15-minute timed quarter.

McDonogh No. 35 scored first when Toreano Minor made a nice over-the-shoulder grab from Roneagles quarterback Sidney Wilson from 9-yards out.

East St. John tied things up when Coxie, lined up in the backfield, took the ball 30 yards for a rushing score to make it 6-6.

McDonogh’s second team scored again on a 2-yard run by Darius May. The Roneagles first team outscored the Wildcats two touchdowns to one in the scripted plays portion of the scrimmage.

In the timed quarter, Coxie negated a Roneagles drive when he intercepted a pass in the endzone. McDonogh scored, however, on the ensuing ESJ drive, when the Roneagles’ Brad Stewart recovered a fumble in the endzone for a score.

“Our defense is seasoned,” said McDonogh No. 35 coach Wayne Reese. “Our offense was terrible, (Friday). But defensively, we’ve got three or four kids who have been with us since the 8th grade who are Division I athletes. We feel very good about that side of the ball.”

On the final play of the evening, ESJ fired back when Adarius Duhe found Shelvin Keller for a 24-yard touchdown.

“I was excited about the way we responded to end the scrimmage,” Foster said. “We’ve got a young quarterback who led us on a drive and we ended on a strong note. Two sophomores on that play gave us a great response.”

Coxie added a jumpball touchdown in redzone drills to round out an explosive night for the transfer from Tara.

“You saw the explosive ability he has,” Foster said. “We’re going to find ways to take advantage of it.”

The Wildcats were without quarterbacks Malcolm Darensbourg and Alvin Jackson. Darensbourg, the team’s projected starter, transferred from Destrehan, where he played last season.

Foster said the team learned Thursday he wouldn’t be able to participate in the spring game, his availability pending a hearing about his eligibility.

“A lot of the negative plays today, the quarterback situation had a lot to do with it,” Foster said.

“We don’t forsee any problems (with Darensbourg’s eligibility).”