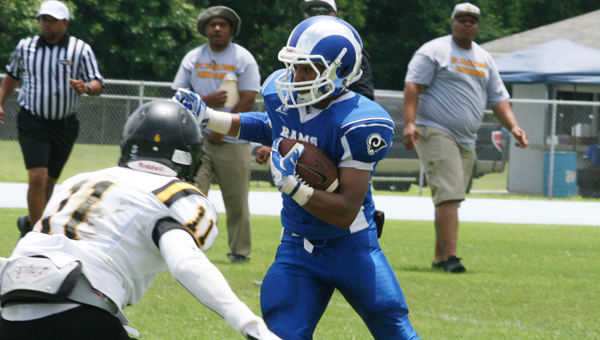 EDGARD — It was all about the big play in Saturday’s spring game between host West St. John and St. Helena Central, and most of those were supplied by the Rams.

“It was very refreshing to see a few of our receivers make really big plays,” West St. John coach Robert Valdez said. “I was pleased with the way both of our quarterbacks managed the game. When the defense takes something away, you have to capitalize.”

The main portion of Saturday’s scrimmage was played under game-like conditions, where each team had four downs to get a first down or to “punt.” There was no live kicking, so electing to punt meant the opposing team would begin at its own 30 yard line.

St. Helena struck first on the afternoon when a pass interference penalty against the Rams helped set up a Darryl Hampton 1-yard touchdown run to make it 6-0.

“We have to grow a little bit defensively,” Valdez said. “We’re playing so many kids on that side that still need to get their feet wet. But we were flying around and making big hits, doing what West St. John is known for. As long as we’re giving effort and playing at full speed, I can live with it.”

The Rams failed to score on their first possession, but quickly got loose thereafter. Three plays into West St. John’s second drive (after a Nicholas Borne forced fumble ended a St. Helena Drive near midfield), Green dialed up a wide open Malik Hutchinson for a 39-yard touchdown to tie the game 6-6.

St. Helena turned it over for a second straight drive when Jamal Walters — who intercepted nine passes last season — picked off Ricky Travis and returned it to the Rams’ 43. It was Jamal’s brother, Jabari, who made that defensive play count, as he hauled in a 42-yard reception and score from Green to put the Rams up 12-6.

Backup Rams quarterback Juwan Boudoin checked in during the Rams’ next possession and on his first pass of the game connected with Jabari Walters, who took it in from 55 yards out to push WSJ ahead 18-6.

“We saw a lot of man-to-man coverage with a lot of blitzing, a lot of slanting … it was hard to get a push (in the run game). We want to run the ball, but when they do so much to take that away, you have to execute in the passing game, and we did that.”

A Lamore Boudoin 25-yard run helped set up the Rams’ next score, this one a short Green-to-Hutchinson toss for an 8-yard touchdown.

Juwan Boudoin’s second pass of the day went for his second long touchdown when he found a wide open DaQuan Frank for a 70-yard touchdown, the Rams’ longest play of the afternoon.

Green and Juwan Boudoin each finished with three touchdown passes.

While Green is the incumbent starter at quarterback, Valdez said the team also has a high comfort level with Boudoin.

“They each know they have to make their reps count because the guy over his shoulder can do it just as well,” Valdez said. “It’s really good to have the luxury of someone like Juwan. Most teams have one guy they can rely on at quarterback. We have two, and I’m good with that.”