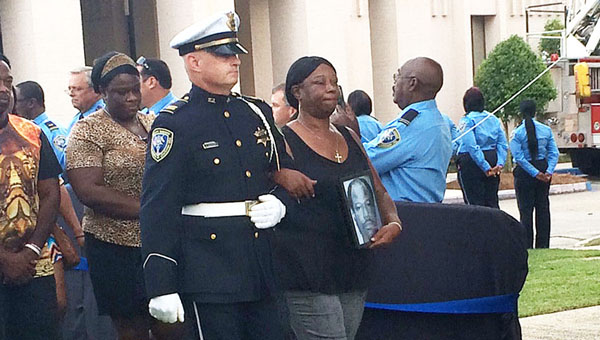 A procession of the victims’ families carrying a picture of their lost loved one began the fallen officers tribute Wednesday.

Officers in dress uniform, a releasing of blue balloons and a table with pictures of the fallen officers were part of the tribute ceremony this week.

Sheriff Mike Tregre hosted a candlelight vigil ceremony on the front lawn of the Percy Hebert Building in honor of National Police Week.

The state of Louisiana alone has lost 451 officers in the line of duty, with St. John the Baptist Parish tragically contributing eight lives to that dismal figure.

The ceremony began with a procession of the victims’ families carrying a picture of their lost loved one. As they processed through an aisle made of officers, crowd members stood quietly, holding either a black or blue balloon that were given out in order to honor the fallen.

After a poem, recited by Deputy Stacy Millet, the crowd of families, supporters and officers released their balloons creating a poignant site in the sky.

The guest speaker for the ceremony was Ricky Edwards, operations director for the Louisiana Sheriff’s Association.

Edwards, father of 10 and devout Christian, spoke of a close friend he lost in the line of duty more than 15 years ago.

“To this day, I still remember getting that call when I was on vacation with my family,” Edwards said.

The former sheriff spoke of the commitment it takes to be an officer.

“Your loved ones chose this career because of their willingness to protect others,” Edwards said. “I have always said that officers work for God, not the people.”

To further celebrate the memory of the eight heroes, the crowd lit candles while a member of the Sheriff Office’s staff serenaded the crowd with “God Bless America.”

The song was followed by sobering words from Sheriff Mike Tregre. He offered encouragement to the victims’ families and the community.

“I know it is hard not to worry, but prayers work,” Tregre said.

The sheriff ended with a quote from Irish political theorist and philosopher Edmund Burk: “Evil prevails when good men do nothing.”

Tregre assured the crowd the men whose lives were taken are heroes to the community and their legacy will always be upheld in the parish.

In 1962, President Kennedy proclaimed May 15 National Peace Officers Memorial Day, and the calendar week in which May 15 falls as National Police Week. Established by a joint resolution of Congress in 1962, National Police Week pays special recognition to those law enforcement officers who have lost their lives in the line of duty for the safety and protection of others.