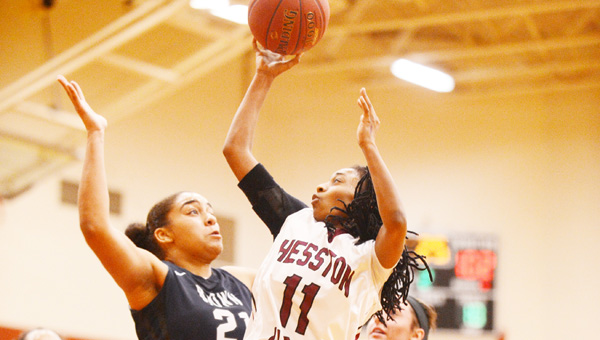 Jermani Thompson drives to the lane for Hesston College. Thompson, a freshman at Hesston, was a standout guard at East St. John.

Editor’s Note: The following story is being reprinted with permission from Hesston College’s TODAY Magazine.

If anyone on the Hesston College women’s basketball team knows what it means to overcome adversity, it’s freshman Jermani Thompson.
Her journey has carried her through devastating storms, both physical and emotional. Her all-in, in-it-to-win-it energy on the court is a stark contrast to the reserved way in which she openly shares her story, a story that few on campus know.

Thompson, a coastal Louisiana native, vividly recalls the horrifying night in 2005 when Hurricane Katrina struck. Her mother was required to stay at work at a veteran’s home so Thompson stayed, too.

The water had risen to Thompson’s neck by the time decisions had to be made. The veteran’s home staff evacuated residents who were well enough, while others in poor health were left behind. Once they escaped, a rescue team arrived bearing crushing news.

“The guys who came to save us told us that five minutes later we would have been dead,” said Thompson.

Thompson and her mother lost everything. The three days following Katrina, they slept outside until they were moved to Louisiana State University’s (Baton Rouge) gymnasium where beds covered the hardwood.

After things settled, Thompson went to live with her grandpa for a while, and her family bought a new house in Laplace, La. Thompson was shooting hoops in the sunshine again, and everything seemed normal. This illusion of stability would soon vanish

In 2012, Thompson and her family were struck again with disaster when their house was lost to Hurricane Isaac. Isaac also demolished Thompson’s school. Basketball became her means for coping.

“I’ve really loved playing basketball since I was small,” said Thompson. “All my brothers played; my dad played… When the hurricane hit, it was motivation and determination to do something with my life.”

The hardships of the hurricanes were not Thompson’s only motivation for working hard.

“A lot of people in New Orleans don’t make it out,” said Thompson. “Then, the summer of my senior year, my dad left my life, so that was extra motivation to be successful. I want to set examples for my younger family members and show them it’s possible to finish school, that you don’t have to turn to the streets to get money.”

So why travel 871 miles to Hesston College?

“I picked Hesston because I knew it would keep me out of trouble and help me stay focused,” said Thompson.

“The people are really nice here. Plus, basketball is a nice opportunity for me to further my education, meet new people and expand my view of the world since Hesston College is so diverse.”

Hesston’s nursing program was an added bonus to playing basketball. Losing three grandparents to cancer within three months in 2009 inspired Thompson to pursue healthcare as a career.

“I decided to go into healthcare because I like helping people,” said Thompson.

No stranger to persevering through challenges, Thompson is doing well as a student athlete.

“It’s hard going from a big city to this small place,” said Thompson. “My friends at Hesston are very supportive, and community people I don’t even know, I feel like they support me, too.”

“Jermani is so different and vibrant that people just gravitate towards her,” said teammate Taelor Drew . “She has a lot of self esteem. She won’t let anyone stop her.”

“Right now, I’m like a sponge,” said Thompson. “My goal is to soak up as much knowledge as possible while I’m here and to apply it to my life after Hesston.”