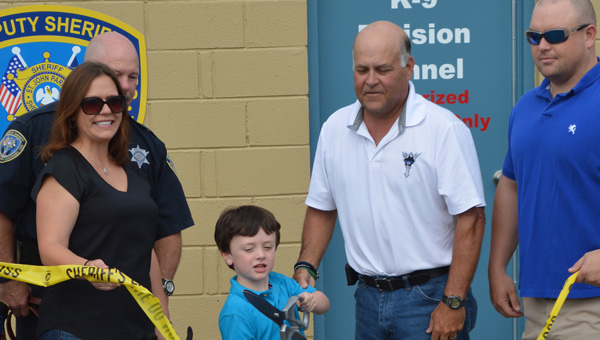 Jeremy Triche’s son Kade cuts the ribbon to officially open the newly constructed dog kennel, which will be used to house the Sheriff’s Office’s K-9 officers. Before Triche’s tragic death in 2012, he dreamed of establishing a major facility for the K-9s. (Photo by Monique Roth)

LAPLACE — “This was his dream.”

“One of Jeremy’s dreams was to have a big facility for the K-9s,” Edie said. “Something state of the art that was air conditioned and heated.”

Her son’s dream is now a reality, as the kennel has been built and on Tuesday was named in honor of Jeremy, who served as a K-9 handler for the Sheriff’s Office.

“Jeremy was one of our best,” Sheriff Mike Tregre said.

“He did a tremendous job. He gave his life to take dangerous people off of the streets of America.”

Jeremy, along with Deputy Brandon Nielsen, was shot and killed in LaPlace on Aug. 16, 2012, by members of a domestic terrorist group known as the Sovereign Citizens.

Many of Jeremy’s family and friends, including his wife Misty and son Kade, attended the dedication ceremony, where they joined others in laughing, smiling and shedding tears through a slide show of family pictures featuring Jeremy.From wedding portraits to work snapshots, with pictures of fishing adventures in between, the slideshow depicted many sides of the man they love and miss.

Edie addressed the crowd after the ribbon cutting and thanked the Sheriff’s Office for keeping Jeremy’s name in the forefront.

“We all miss him,” she said. “Thank you for remembering him every day. This is a job he loved to do.”

Edie said she and her family established the Deputy Jeremy Triche Fallen Hero Foundation to spread the word of Jeremy’s love of law enforcement and to further the efforts of law enforcement by contributing to K-9 officers and their partners around the country.

More about the non-profit organization can be found at jeremytrichehero.org.

The new kennel provides the first heated and air-conditioned facility for the K-9s, one that is accessible to them from their outdoor running area.

Tregre said the building would provide a comfortable environment for the animals during changing temperatures and severe weather events. A bathing area is also housed in the building.

“All give some, but some give all,” Tregre said standing in front of the new kennel building. “This is for Jeremy Triche.”