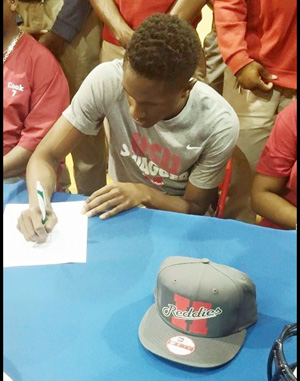 Those traits, among others, have Riverside’s Darrion Cook on his way to play football at the next level.

The standout Rebels wide receiver recently signed with Henderson State (Ark.) following a prep career that saw him comprise, along with teammates Herb McGee and Von Julien, one of the most talented and productive receiving trios in the state over the past two seasons.

“It feels amazing,” Cook said. “I can’t wait to get back out on the field.”

Cook said Henderson’s spread offense appealed to him as a strong fit for his skillset, after playing in a similar shotgun-heavy attack with the Rebels.

“They throw it the majority of the time,” Cook said. “Their coaches showed a lot of interest. I feel really good about it.”

Riverside coach Bill Stubbs said Cook, who was also a key rotation player on the Rebels’ multi-time state champion basketball team and a sprinter on the track and field squad, said he believes Henderson is getting a steal.

“He gave us a lot of balance,” Stubbs said. “Early on, he wouldn’t draw a lot of double-coverage due to Herb and Von. As he started making plays and taking advantage of that coverage, we took advantage of his ability to make plays. Soon, teams had to start really accounting for him, and then Herb and Von saw better opportunities.

“They got a steal, to me, because he really started coming on as a junior and senior. I think he’s got a whole lot of great football ahead of him.”

While Cook hauled in plenty of huge conversions and generated big plays, Stubbs said the first thing that comes to the coach’s mind when Cook is talked about was his evolution into a complete football player.

“When he isn’t catching passes, he’s doing a real nice job blocking on the outside,” Stubbs said. “Wide receivers are funny guys. They want the ball to come their way. When you have a guy who’s going to block and wears it like a badge of honor, that’s special.”

Cook said he believed his physicality was something the Henderson coaching staff noticed.

“I’ve always been a physical guy,” said Cook, who also took pride in his role as a defensive stopper on the basketball team. “I’m not afraid of contact. They’d heard I was a good team player and they thought I was sure-handed. I think they’re a great fit for me.”