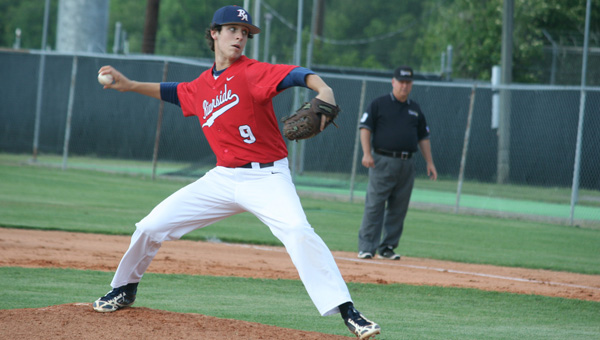 Riverside’s Mason Vicknair is one of the key Rebels who will return next season. (Ryan Arena/L’OBSERVATEUR)

BATON ROUGE — After more than a month of scalding hot play, Riverside finally cooled off in Saturday’s Class 2A quarterfinal game at second-seeded Runnels, and it spelled the end of the Rebels’ season.

Runnels scored at least two runs in five of its six innings at-bat to advance to the state semifinals with an 11-2 victory. The Raiders will face Oak Grove at noon Friday in Sulphur.

“It’s a tough pill to swallow, any time you lose,” Riverside coach Frank Cazeaux said. “I felt, offensively, we played one of our worst games of the season. Their pitcher (Josh Sparks) obviously had something to do with that.

“All of a sudden, you look up, and you’re in the fifth inning, sixth, seventh … the game felt like it went by so fast.”

Runnels (21-4) outhit Riverside 15 to 3, with the Raiders’ Johnny Johnson leading the way offensively. He went 4 for 5 with three RBIs and two runs scored. Hampton Hudson went 2 for 3 with two RBIs and two runs scored, and Thomas Myers was 2 for 4 with two RBIs. Ridge Ory and Emory Monett each collected two hits  for Runnels. The Raiders collected eight extra base hits.

The seventh-seeded Rebels won 13 straight games prior to the quarterfinal game, its last previous loss coming on March 23 to Lutcher.

Cazeaux said once the Raiders got a sizable lead, an offensive struggle became even more difficult.

“Once you’re down by seven, your approach changes,” Cazeaux said. “If you’re within striking distance, you can play things a little differently.”

Runnels earned a measure of payback with the victory — Riverside eliminated the Raiders last season in the 2014 quarterfinals, putting to an end an underdog run by the then 22nd seed.

This time, the Raiders got off to a quick start. Hudson and Monett each drove in runs in the first inning to give Runnels a 2-0 lead. Riverside tied the game 2-2 in the second inning, Jared Hymel’s RBI single and Drake Perret’s sacrifice fly.

But the Rebels stalled thereafter, while Runnels answered with a pair of runs in the bottom of the second inning. Runnels went scoreless in the third inning, but scored three runs in the fourth, two in the fifth and two more in the sixth.

Cazeaux, who wrapped up his first season as Riverside coach Saturday, said this year’s team was a true joy to coach.

“I’ve been doing this for 31 years, and I’d be hard-pressed to think of a team that worked harder,” he said.

“These kids bought in completely. We never had to ask anyone to do something twice. The worst thing (about the loss is) you feel bad for the seniors. We felt like we were good enough to make a run at the whole thing.”

Five seniors — Sean Mohon, Brandon Hymel, T.J. St. Pierre, Kameron Bailey and Bailey Vicknair — are departing. The Rebels are expected to return six regular starters to their lineup next season, however, including Mason Vicknair, one of the club’s go-to pitchers.

“I think we’ll have a chance to do very well next year,” Cazeaux said. “I suppose the message we take is there’s always someone who can beat you if you have an off day. Strive to be the best every day, because one bad outing at the wrong time can end it.”