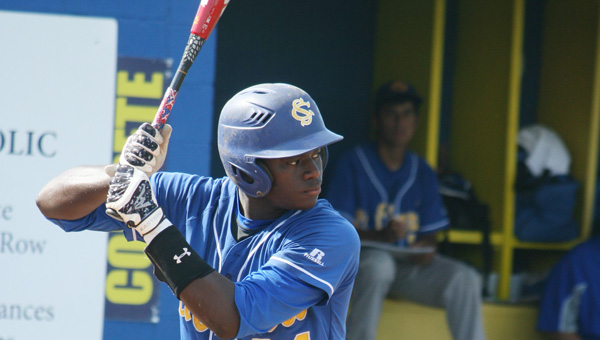 IOWA —  St. Charles Catholic fought back after falling behind 5-1 at Iowa in Sunday’s quarterfinal game, but a hit batter with the bases loaded in the bottom of the seventh inning forced in the game-winning run for the host Yellowjackets, who advanced to the Class 3A semifinals via a 7-6 victory.

The Comets tied the game on Eian Mitchell’s RBI single in the sixth inning, making it 6-6 headed into the seventh.

“I’m disappointed in the result, but not the effort of my guys,” St. Charles coach Wayne Stein said. “You’re in a hostile environment and you’re down 5-1, and we clawed back. Unfortunately, when you don’t get that early edge on someone and you fall behind, you expend so much emotion and energy to get back in it, and it makes it tough to finish.”

The Comets (22-11) have been clutch all season with two outs and runners on, but it wasn’t the case at Iowa. SCC left 12 men on base.

“We didn’t get that big two-out hit,” Stein said. “We weren’t fooled at the plate, we had 12 hits. Give Iowa (22-8) credit, though. We didn’t go out there and give it away or make a bunch of errors. They played a great game.”

Justin Loupe led St. Charles at the plate, going 3 for 4. Mitchell and Lloyd Nash each went 2 for 4. Austin Weber — who delivered a sixth inning RBI double to set up Mitchell’s game-tying single — was 1 for 3.

A four-run third inning proved the biggest catalyst for the Iowa win.

Stein said he felt a couple of early momentum swings loomed large. SCC led 1-0 in the first inning, but Iowa manufactured a tying run in their half of the inning with nobody on and two out after a SCC hit batter.

“They did it again in the fifth,” Stein said. “We had some chances to get out of innings with no damage.”

The Comets will return most of its team for next season with a pair of notable senior starters the exceptions: pitcher/second baseman Weber and first baseman Mitchell.

“Eian didn’t put up his best numbers to start the season, but man, did he ever come on at the end,” Stein said. “He went 3 for 4 in the second round then 2 for 4 with the game-tying RBI in the quarterfinal. Both he and Austin showed so much leadership this season.”

Weber finished the season without striking out once at the plate over the full 33-game slate. He hit .410 on the season. Stein noted Weber has struck out just four times in his career as a four-year Comets starter.

“That’s phenomenal,” Stein said. “That’s hard to do no matter who you are, and to hit .410 while you’re doing it … he wasn’t just choking up on the bat or anything. He produced. We’re going to miss both he and Eian.”