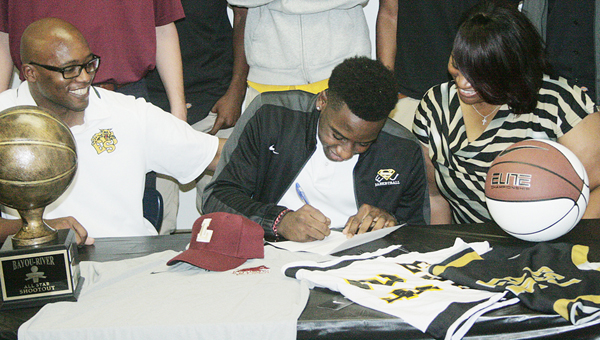 RESERVE — East St. John boys basketball coach Yussef Jasmine remembers his son Tre’Von “basically learning to walk” at the Loyola University-New Orleans gym, where the coach became one of the most celebrated athletes in the school’s history during his playing days.

“I had no idea back then,” the father said, “that he’d be playing in this same gym 19 years later.”

Tre’Von, now a senior at East St. John, put pen to paper Wednesday in a special signing ceremony at Leon Godchaux Jr. High, officially signing a basketball scholarship to play at Loyola, where his father became a Wolfpack Hall of Famer during his playing days.

“I’m following in his footsteps,” Tre’Von Jasmine said. “Just like he made the Hall of Fame, I want to do that too. I want to do everything he did, but even better. That’s always been what he’s pushed me to be. He wants me to be better than he was.”

The 6’1” guard has played for his father throughout the entirety of his prep career, a three-year starter who shifted from shooting guard to point guard in his senior season. He averaged 18.8 points, 4.3 rebounds, 4.2 assists and 2.0 steals in his final year with the team and was selected as the District 7-5A MVP.

The younger Jasmine said the chance to play close to home and his comfort level with the Loyola coaching staff were a big part of the decision.

“Coach Stacy (Hollowell) is a cool coach and he’s wanted me since the beginning of our season,” he said. “He told me what I had to do to get here and I’ve been doing it ever since.”

Yussef Jasmine said while he knew of his son’s decision weeks ago, the night before the signing led to much tossing and turning.

“I couldn’t really sleep,” he said. “It’s just such an exciting day. To watch him and coach him at the high school level is one thing, but to watch how much he’d grown and matured as a player and a student, it’s everything I could ever want.”

Said Tre’Von, “These past few years, playing with my teammates and enjoying this with my family, I wouldn’t trade it for anything.”

“I thought I was nagging him a little too much about (the ACT), so I backed off,” Yussef Jasmine said. “But for him to go from a 17 to a 25 … I guess he was listening.

“We want people to see what we’re doing at East St. John … I know I’ve always sought for my players to grow into being well-rounded young men of strong character and true student-athletes. Tre’s a great example of everything we strive for with our program.”

Yussef Jasmine, who played at Loyola from 1997 to 2000, set a high bar for his son: he scored 1,418 points at the school, the fourth highest mark in team history.

“You know when you leave something behind, someone’s going to come and outdo you eventually, break your records and knock you down on that list,” Yussef Jasmine said.

“The unique thing for me, now, is I want that to happen. I’m rooting for it.”