Riverside falls 9-8 to Winnfield in 2A semifinal 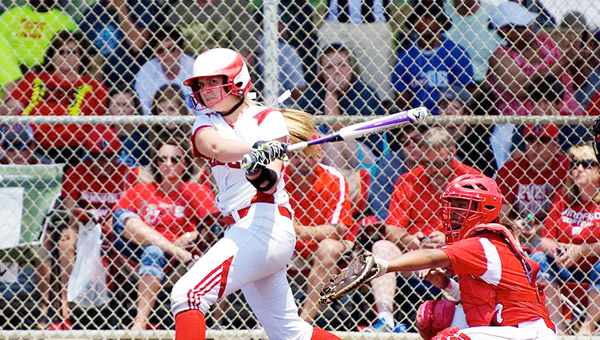 Riverside’s Madison Watson hits one to right field during the Rebels’ semifinal game with Winnfield Saturday afternoon in Sulphur. Riverside fell 9-8 to the Tigers to conclude its season.(Submitted by Carrie Turnbull)

SULPHUR — Riverside Academy’s potent offense showed itself in Saturday’s Class 2A semifinal game with Winnfield, making clear no lead was completely safe against the Lady Rebels.

But on this day, a game Tigers squad mixed with some costly mistakes spelled the end of Riverside’s championship chase.

RA erased a 9-3 deficit via a five-run fifth inning but couldn’t complete the comeback, Winnfield advancing to the 2A championship game with a 9-8 victory Saturday afternoon.

“Toward the end, we showed some fight,” Riverside coach Tamra Regalo said. “But we didn’t produce in the bottom of our lineup. We knew we were going to hit, but we couldn’t afford to make mental mistakes, and I felt like we did that.”

The Rebels made a stirring comeback in the fifth inning that momentarily turned the tide in their favor.

Toni Perrin reached on an error to lead off the inning, then Caitlin Roussel walked. Janie Milioto doubled to score both runners, cutting the Winnfield lead to 9-5. Madison Watson grounded out but drove in another run. Hailey Tassin singled, then Erica Delaneuville reached on an error, plating another run to make it 9-7.

That led Winnfield to call back upon Johnson, the Tigers’ starting pitcher who had been pulled in the fourth. Lindsey Oubre connected on a fly ball that sacrificed in a run to make it 9-8, but Johnson struck out Abby Bourgeois to end the threat.

Hailey Tassin retired the side in order in the top of the sixth, but Johnson returned the favor in the bottom half. After holding Winnfield to another scoreless frame in the seventh, RA had one more shot. Watson and Delaneuville each singled, but Johnson got Oubre to fly out to end the game.

“Momentum was in our favor, but we just didn’t get that extra push,” Regalo said.

RA led 1-0 early after Delaneuville’s solo home run in the second inning, but Winnfield took a commanding lead by scoring nine runs over the third and fourth innings.

Emily Barnett walked to lead off the Tigers’ half of the third. Kasey James singled before Rachel Yocum was hit by a pitch to load the bases.

The Rebels got a ground ball, but an attempted force out at home led to an error and two runs came across to give Winnfield a 2-1 lead.

Tassin came on in relief for Rebels starting pitcher Cheyenne Triche, but a run was forced in when umpires ruled an illegal pitch, making it 3-1. Kathryn James walked and Anna Beth Johnson walked to load the bases again. Another illegal pitch ruling made it 4-1, and a Kaitlyn Clements ground ball made it 5-1.

Riverside answered in their half. Perrin and Roussel each walked before Milioto hit an infield single to load the bases. A wild pitch led to Riverside’s second run, then Tassin drove in another to make it 5-3.

The Rebels (21-6) have finished as at least a state semifinalist in each of the past five seasons. The loss snapped a 17-game win streak.

RIVERSIDE 2, MANY 1 — The Rebels advanced to Saturday’s semifinal with a 2-1 victory over No. 10 seed Many Friday.

Riverside trailed 1-0 in the bottom of the sixth, but rallied on Tassin’s RBI single and some clutch baserunning by courtesy runner Taylor Aubert.

Roussel scored on Tassin’s single, then Aubert was inserted to run for Tassin. She stole second and in the process drew a throwing error by Many, allowing her to advance to third. Another overthrow gave Aubert the green light to make a dash for home, scoring what proved to be the game-winning run.