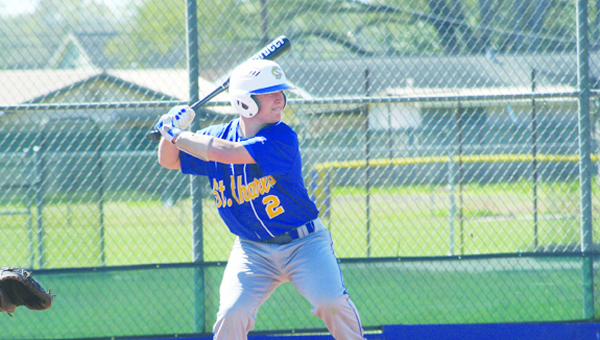 SCC’s Austin Weber has yet to strike out this season. (Photo by RYAN ARENA/L’OBSERVATEUR)

LAPLACE — A nine-run fourth inning highlighted the regular season finale for St. Charles Catholic, which heads into the baseball postseason riding high after a 9-0 victory over visiting Episcopal Saturday.

It was the Comets’ sixth consecutive victory. St. Charles is 7-1 in its past eight games, seven of those contests against teams sporting records over .500.

Brennan Gilberti earned the win for the Comets. He went five shut out innings and allowed three hits. He walked one and struck out one.

Episcopal dropped to 15-10 with the loss.

St. Charles appears likely to earn the sixth seed in Class 3A and will host its first round playoff game.

SCC coach Wayne Stein said Saturday’s game generated a bit of concern within him early on, but that his players rose to the challenge.

“We weren’t too emotional and it took us a little while to wake up,” Stein said.

“It was a different type of game. Both teams were looking at it as a way to tune up for the playoffs. Obviously, though, you’re there to win. (Gilberti) threw a nice game and we took care of business.”

Since losing a trio of games in March to District 11-3A foe John Curtis (twice) and non-district competitor E.D. White, the Comets have lost just twice, each time by a single run to Brother Martin and Dutchtown respectively. SCC boasts wins over Maurepas, University Lab and St. Thomas Aquinas over that span, each team ranked in the top 8 of its classification.

“I don’t think we could have scripted it any better,” Stein said.

The way the Comets have secured some of those wins has been a big plus. The Comets have allowed two runs or less in each of their past nine games and eight runs overall in that span.

“When you get to the playoffs, let’s face it, you’re not going to pound out 12 hits a game,” Stein said.

“You’re facing another team’s best guy, and you have to find a way to score. We did that throughout the past week.”

Among those exhibiting offensive consistency, Austin Weber went the entire regular season without striking out once at the plate.

“We haven’t had anyone do that here since I’ve been (at St. Charles), I know that,” Stein said. “That’s really unbelievable.

“We’ve faced some Division I pitching, so to do that is really remarkable.”