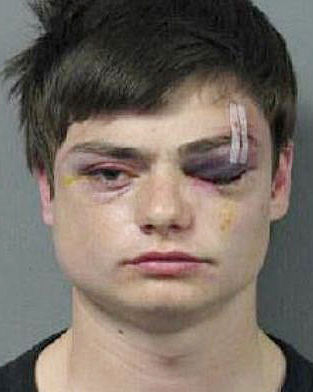 Brady Becker: ‘He treated me like I was lower than what I am’

RESERVE — A week has passed since the controversial arrest of 17-year-old Brady Becker of Reserve – who was punched in the face repeatedly by the arresting officer – and national interest in the case shows no signs of waning any time soon.

Becker, arrested by two Jefferson Parish Sheriff’s Office deputies Feb. 13, was surrounded by a throng of supporters in front of his Reserve home Thursday as he spoke publicly for the first time about his arrest, some of which was captured on video by a cell phone and has been viewed nearly 200,000 times since Sunday in a graphic, 37-second YouTube upload.

Becker said Breaux “just threw me on the ground and started beating me.”

Becker was arrested Feb. 13 and booked with inciting a riot, resisting an officer, battery of a police officer and underage possession of alcohol after an altercation in the inside of a parking garage located in the 3301 block of Veterans Boulevard in Metairie.

Becker’s attorney, David Belfield III, said the family has filed complaints with the Sheriff’s Office and the U.S. Attorney’s Office.

“You look at the video … he’s not striking anybody, his fists are not balled up,” Belfield said of Becker. “If you listed closely I don’t think he’s even saying a word…he’s just getting the crap beat out of him by a Jefferson Parish police officer.”

Deputies listed in the arrest register include Breaux, named as the arresting and transporting officer, and Cory Porche, listed as an arresting officer.

According to the arrest register, Breaux and Porche were conducting “proactive patrol” in civilian clothing inside of the parking garage, and “while walking past a large group of individuals, (Becker) began screaming ‘[expletive deleted] the cops’ multiple times,” the arrest register states.

Becker pushed Breaux after the detectives approached Becker and identified themselves as police officers, the report states, adding Breaux then “escorted” Becker “to the ground into a prone position for handcuffing.”

Belfield told WDSU “this is not the first time that (Breaux) beat somebody or was involved in some hanky panky … this is not his first merry-go-round.”

Belfield said Breaux – a black belt and MMA fighter whose professional fighting matches are featured prominently on YouTube – resorted to “grinding and pounding a 17-year-old in the face.”

According to the arrest register, Becker struck Breaux as Breaux attempted to handcuff the teenager. Becker was brought to University Hospital to be treated for injuries before being taken to the Jefferson Parish Correctional Center for booking.

The report concludes by saying Becker told authorities “he had consumed a half bottle of Crown.”

Donnell Becker, the mother of the arrested teenager, took to her Facebook page Sunday to express her gratitude for the support her family had received following her son’s arrest.

“The fight for justice is going to be a long tough road, but I won’t stop until justice is served for these kids,” she posted. “They deserve it.”