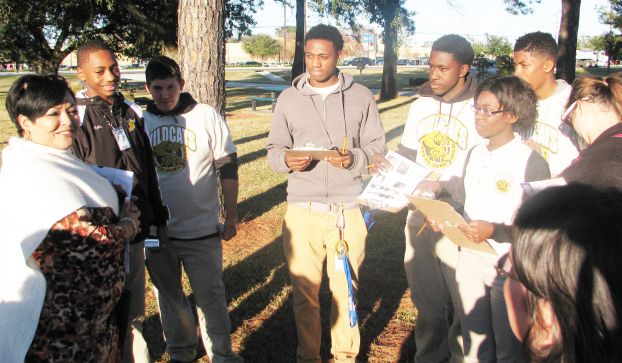 RESERVE — The East St. John High School 4-H club was chosen as the second school in Louisiana to participate in a state-funded hazard mitigation program, and state officials working with the students are thrilled with the hard work being put forth.

“I’m very impressed with them, because they’re a generation that’s actually lived through a natural disaster,” Shandy Hill, extension associate with the LSU AgCenter, said. “They’re understanding it quite well.”

The objective of the 4-H Youth Hazard Mitigation Program, recently rebranded as the 4-H Adaptation Team or “A” team, is “to promote greater awareness and appreciation of the hazards the students’ communities face, and through a service learning project, get them involved in developing plans to protect a publicly owned facility from being damaged by a natural disaster,” Debbie Hurlbert of the LSU AgCenter said.

Vermillion Parish participated in the program launch, Hurlbert said, and St. John the Baptist Parish was chosen after representatives “looked at places we thought would entertain the idea of the program.”

Hurlbert said all of the pieces fell into place for ninth grade students in East St. John’s 4-H club to participate.

The learning experience for East St. John students is particularly unique, Hurlbert said, because they are seeing disaster recovery first-hand on their campus, which is being reconstructed after flooding in 2012 with Hurricane Isaac.

The project is funded by a Statewide Hazard Mitigation Community Education and Outreach Project that the Governor’s Office of Homeland Security and Emergency Preparedness calls “Get a Gameplan,” Hurlbert said.

By the program’s end in May the 4-H students at East St. John will have a better understanding of the vulnerabilities and risks associated with natural disasters through the many hands-on class sessions.

Hurlbert said a design and teaching team made up of extension specialists from the LSU AgCenter Biological and Agricultural Engineering department with expertise in disaster and flood mitigation, construction management and youth development travel to East St. John from Baton Rouge twice a month to hold two-hour classes after school.

“The sessions are designed to allow students to get involved in their family and community’s future by learning step-by-step strategies in reducing disaster losses,” Hurlbert said.

The capstone project for the students at East St. John is working on designing a safe room for the parish’s Emergency Operations Center. At the conclusion of the project, Hill said the students will have completed a hazard mitigation grant application and presented their findings to the Parish Council.

Through the program, officials said the 4-H members will learn hazard mitigation is the sustained action taken to reduce or eliminate long-term risk to people and property (structures) from hazards, such as, flooding and strong winds.

“In addition, they will learn about ownership of public property, evaluating options for spending public funds and the role of government in disaster management,” Hurlbert said.

“The students will also be aware of how identifying the risks and vulnerabilities within a community and then developing appropriate strategies for protecting people and property from future hazards is important to their futures.”

Officials hope students will emerge from these experiences better prepared to have a voice in community hazard mitigation conversations and become aware of information that helps protect their own homes and neighbors’ homes from future disasters.

“They’re learning job sills and now they know these options exist and they could possibly do (hazard mitigation) work and help their community and state,” Hill said.

East St. John 4-H representative Patti Rodrigue, who has been in her post for 30 years, said the students love the hazard mitigation program.

“If they could do it everyday they would,” Rodrigue said. “They put everything into it.”

Student DeLloyd Gray said the program has been a great learning experience for him.

“I like to build,” Gray said. “I’m really happy they picked my year in 9th grade to do this.”

Gray said he plans on studying design and architecture in college, and the hazard mitigation program has been eye opening to him.

“Since my house flooded, I think if it happened ever again I’d be more prepared for what’s coming,” Duhe said.

RESERVE — Contractors and businesses wanting to work with the St. John the Baptist Parish School District will have to... read more