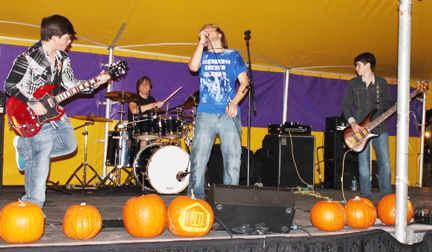 “I’m most looking forward to the energy of playing in front of a large crowd,” Browning, the son of Kurt and Karyn Kienitz of LaPlace, said.

Remedy will take the stage at 11 a.m. Sunday, with the festival taking place on the neutral ground of Veterans Memorial Boulevard across from Lakeside Shopping Center in Metairie.

Browning said Remedy started out from a desire of some of its members to earn a Cub Scout badge in fourth grade, and has since grown into a group that has played at sites and festivals including Blue Bayou Dixie Land Water Park, LaPlace’s Andouille Festival, the NOLA Global Youth, St. Charles Parish’s Alligator Festival and the French Quarter Festival.

Remedy, who was the 2010 Grand Champions at the Louisiana Kids State competition and then went on to win first place in their category at the American Kids National competition in Missouri, has opened for acts including Cody Simpson, The Top Cats, The Chee Wheez and Five Finger Discount.

Police are investigating a daytime shooting in Reserve that took place near children at play. read more