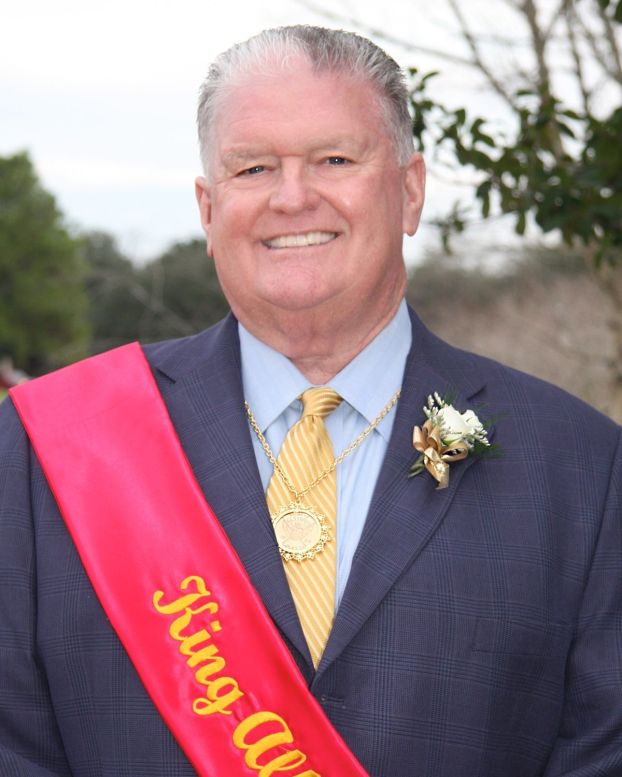 The ball will be held at St. Charles Catholic High School in LaPlace, and the court is selected on the basis of their participation in the LARAYO organization and Krewe of Allovus.

King Allovus L, Wayne Jones, has been married to his wife, JoAnn, for 40 years. They reside in LaPlace.

Wayne and JoAnn have three daughters — Stacy Tribe, Kelly Arnett and Jamie Jones — and five grandchildren. Wayne is retired from the St. John the Baptist Parish Sheriff’s Office, where he served 32 years with 16 of those years served as sheriff. He presently owns Professional Consulting Services LLC.

Wayne has given service to the LaPlace Jaycees, served as Lion’s Club President and is currently serving as an SCC Board Member.

Wayne and JoAnn have been involved with LARAYO for over 36 years, having each served on the Board of Directors. Wayne coached softball for eight years and is active in sponsoring the baseball, swimming and softball programs.

In his spare time, Wayne and JoAnn spend most of their days helping with their grandchildren, and Wayne also loves spending time with friends and watching sporting events.

Queen Allovus L, Chelsie Cupit, is the 19-year-old daughter of Steve and Julie Cupit of LaPlace.

She is in her second year at Delgado Community College, where she is majoring in accounting.

Her parents have been members of LARAYO for the past 17 years, where they each held many positions and have been members of the Krewe of Allovus for the past 14 years. Chelsie’s mother, Julie, served as secretary for the Krewe for three years, and Chelsie’s father, Steve, served as Duke XXXV, Captain of Allovus XLIII, XLIV and XLV and King Allovus XLVIII. Her grandfather, Stephen Cupit Sr., served as Duke Allovus X and King Allovus XI.

Duke Mark Louis Loup is married to Jennifer Bolton Loup. They reside in Montz with their 10-year-old twins, Emma and Ethan.

Mark, employed in the pharmaceutical industry by Actavis Pharmaceuticals, has been a member of LARAYO since 1979. He played baseball and was on the swim team as a youth, and has been on the Board of Directors since 2011. He holds the post of Special Projects for LARAYO.

Mark has coached baseball for the last four years, and he and Jennifer have been active members of the Allovus Organization since 2010.

Maid Jeanne Marie Roussel is the 16-year-old daughter of Mark and Jeannine Roussel of LaPlace.

Currently a junior at SCC, she is a member of the swim team, tennis team and art club. Jeanne’s family has been members of LARAYO for 17 years and members of Krewe of Allovus for 15 years.

Jeanne played LARAYO softball for seven years and has been on the swim team for nine years. She has worked concessions for the Krewe of Allovus Ball for two years, and her father, Mark, has served on the Board of Directors for 10 years and has coached baseball/softball for 12 years. He was a Duke in Allovus XXXVI.

Jeanne’s mother, Jeannine, has chaired the computer room for LARAYO’s Swim Invitation for two years and has served for three years on Krewe of Allovus’ Queen’s Committee.

For the past 17 years, Curt has been employed by Shell Oil Company. His family has been members of LARAYO for the past seven years. Curt has assisted in the coaching of softball and baseball, as well as serving on the Board of Directors.

Maid Madeleine Marie Murphy is the 16-year-old daughter of Mike and Giselle Murphy of LaPlace.

A junior at SCC, she is a member of the BETA Club, National Honor Society, Student Council, volleyball and basketball teams. Madeleine’s family has been members of LARAYO for 22 years, where she played softball for seven years and has been on the swim team for 10 years.

Madeleine is a lifeguard during the summer, and her father, Mike, has served on the Board of Directors and coached baseball for 14 years. He was a Duke in Allovus XXXI and King Allovus XL, with Madeleine serving as his page. Madeleine’s family has been members of the Krewe of Allovus for 18 years, with her mother, Giselle, serving as chair of Allovus’ Queen’s Committee for four years and Madeleine working concessions and lights at the ball for two years.

Duke Steven Faucheux Jr. is married to Leslie Bailey Faucheux. The couple resides in LaPlace and have two children, Owen and Hartley.

Steven has been employed by the St. John the Baptist Parish Sheriff’s Office for 11 years. He and Leslie have been members of the Krewe of Allovus for the past two years.

He has coached LARAYO baseball for the past four years, along with volunteering to do other jobs at the ballpark. Leslie serves as the swim team league representative for the LARAYO Barracudas.

Maid Kaylyn Rebecca Montz is the daughter of Steven and Dolores Montz.

A junior honor student at Riverside Academy, Kaylyn is a varsity soccer player and yearbook designer, assists with the Krewe Bord De L’eau and is the statistician for the football team.

Kaylyn is an active member in LARAYO, where she played softball for nine years and now assists in coaching the younger girls. She also swam for four years.

Kaylyn assisted her father with his duties as Captain of the Krewe of Allovus XLVI, XLVII and XLVIII. Steven was also a Duke in Allovus XLII. Kaylyn resides with her family in Reserve.

Duke Ron Cortez is married to Wanda Heltz Cortez. Together, they have four children — Macky, Trace, Bryce and Bailee.

Ron, employed at Dow Chemical as an ODMS coordinator, has served on the LARAYO Board for eight years and has coached boys baseball. His wife Wanda has been the LARAYO concession manager for the past nine years.

Maid Julia Rayne Cupit, daughter of Andrew and Helena Cupit, is a 2014 SCC graduate and a freshman at Louisiana State University.

At LARAYO, Julia was a 13-year member of the softball team and swam for 15 years. Her father, Drew, has been a Board member for 28 years and has coached baseball and softball. He was a Duke in Allovus XXIV and reigned as King Allovus XXXI. Julia’s sister Kelly Cupit Hubbell was Queen Allovus XLIII and her sister Marie Cupit was Queen Allovus XLVII.

Michael C. Reine, Captain Allovus L, is married to the former Alisha Heltz. They have two children, Shelby and Macie.

Michael has been a life-long member of the LARAYO organization. He has been on the Board of Directors for 12 years and is currently vice president, as well as the girls’ softball director. Michael was a Duke in 2006 and King Allovus XLVII.

Completing his reign is King Allovus XLIX, Joey M. Brady. Joey has been married to LacieAnn Millet for 26 years, and they reside in Reserve with their son Benjamin J. Brady.

Joey was Captain of the Krewe of Allovus XXXIX, XL, XLI and XLII. While serving on the LARAYO Board with six years of service, he took on positions such as pool director, River Parish Swim League representative and vice president.

Queen Allovus XLIX Nicole Marie Klibert is the daughter of Kevin and Melissa Klibert of LaPlace.

A junior at Northwestern State University majoring in kinesiology, Nicole is a member of Alpha Omicron Pi Fraternity and is the 2015 Vice President of Recruitment for the Northwestern State University College Panhellenic Council. She was a Maid in Allovus XLVI, and would like to thank LARAYO and her parents for giving her the opportunity of being chosen to represent such an amazing organization.