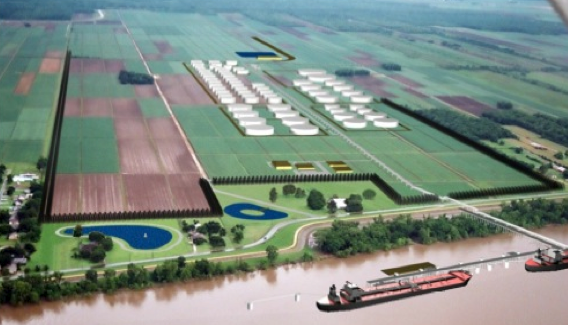 VACHERIE — The continuing deterioration in the relationship between Petroplex International, LLC and St. James Parish Government hit a new low this week when the Baton Rouge-based company sued the Parish of St. James, Parish President Timothy Roussel and Ryan Donadieu, supervisor of planning and permitting.

Each are named as defendants in a lawsuit filed Thursday morning by Petroplex.

“This is not the outcome we had hoped for,” Larry Sciacchetano, Petroplex chief executive officer, said. “We had built momentum in the development and financing aspects of this project and finished the soil loading of the first tank foundation when the stop-work order was issued. We made every effort to satisfy the parish president that we had fully complied with the (Parish) Council’s resolution and had offered a reasonable compromise solution that would guarantee construction of the tank farm on the schedule we had committed to the Parish Council.

“Had we not fulfilled that commitment, Petroplex would agree to relinquish our permit rights and take any litigation off the table. When this offer was rejected, we had no choice but to file this suit to recover our investment and future income.”

St. James Parish sent the company a stop-work order in early December for its ongoing $800 million tank farm project, which was under construction in Vacherie.

Citing a lack of progress at the construction location and unmet obligations with an agreed-upon timeline, parish officials halted the progress.

Attempts to reach Roussel — who was in Washington D.C. late this week — for comment Thursday and Friday morning before press time were unsuccessful.

When asked for his reaction about the legal actions, St. James Parish Council Chairman Charles Ketchens said he was instructed by Parish legal advisers not to comment on the litigation.

According to a release from the company, Petroplex is seeking relief for damages for improper actions taken by the parish in passing its Comprehensive Land Use Plan and a subsequent stop-work order issued by the parish administration.

Petroplex officials said they have spent $33 million to date on the development of the project prior to the enforcement of the Land Use Plan.

Thursday’s lawsuit news is the latest setback for the project, which was halted by the stop-work order Dec. 3 and scrutinized for fines by the Louisiana State Licensing Board last week.

According to Brent Templet, who works in the state department’s compliance department, five companies working at the Vacherie site were fined during a meeting Jan. 16 for licensing faults.

“There were five separate matters on that job,” Templet said. “Two of them involved contractors that needed to be licensed that were not.”

Verwater U.S.A. Projects and QPS Engineering were cited for contracting without a license. Verwater pleaded no contest and paid a total fine of $2,500.

They filled out an application and have received a license.

QPS Engineering paid a $2,000 fine and $500 cost of court and is now properly licensed, Templet said.

Hickerson Enterprises paid a $500 fine and $500 in court costs for being licensed but not doing work they were licensed to do, Templet said.

“They were doing work that would have required a different license,” Templet said. “All five of the parities that were involved (pleaded) no contest and offered settlement offers.”

Templet said the Jan. 16 hearing was held because the state received a complaint there was an unlicensed contractor overseeing that project.

Petroplex officials said the tank farm project in Vacherie would create 473 jobs in the River Parishes and 1,095 jobs statewide.

A company release indicated there would be 68 people directly employed by the facility and it would generate 1,923 direct and indirect jobs over 10 years in the River Parishes and 3,000 statewide.

The project would have an overall economic impact of $718.2 million in the River Parishes and more than $1 billion at the state level, company officials said.

This week’s lawsuit was expected for some time following what has turned into a contentious relationship between Petroplex and St. James Parish Government.

“We came to a Council meeting in the first week of November (and) were implored, if not ordered, by some Council members to speed up the process, get after it, speed up construction,” Bryan said at Jan. 7’s meeting. “We took that to heart and absolutely did that and were in the middle of doing it, and then a stop-work order was issued, and it was issued before we had a chance to meet with the parish and respond to the allegations in the letter.”

Neither request was met with a response at the Council meeting.

Parish government officials and Petroplex officials, along with lawyers for each side, have met previously in efforts to find some common ground, but have made little progress.

“It’s an uncomfortable situation,” Roussel said previously. “We don’t want to see anyone spend a huge amount of money and not gain from it, but at the same time, we need to do what is best for the taxpayers of St. James Parish, too.”

Guns and ski masks were recovered during separate traffic stops in LaPlace Wednesday, leading to the arrests of seven males,... read more