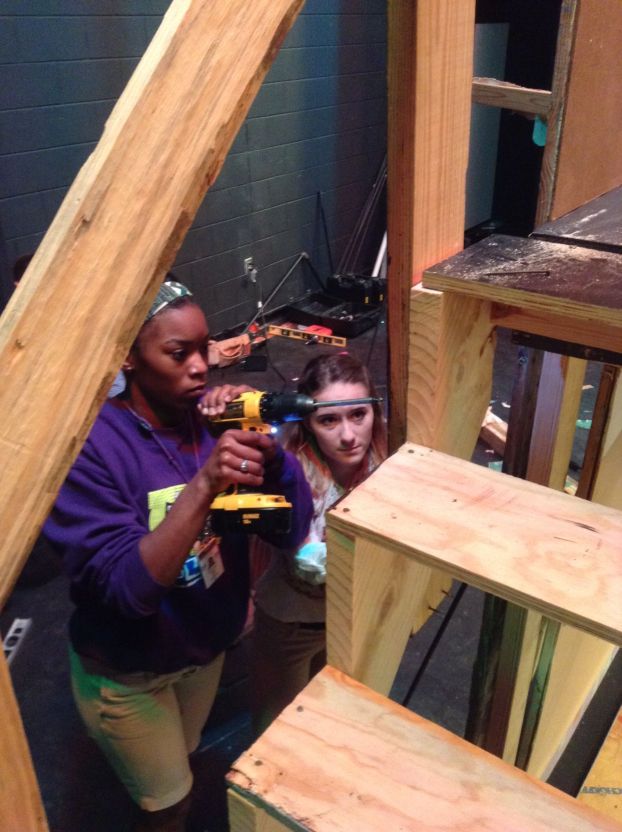 BOUTTE — In what Director Lucas Harms describes as “extremely smart and funny” and “the edgiest musical Hahnville has ever done,” Hahnville High School’s upcoming theater production “Urinetown, the Musical” will be showcased on the Hahnville Auditorium stage Jan. 29 and 30 and Feb. 6 and 7.

“We have earned a reputation in the past few years for providing affordable, quality arts entertainment in the River Parishes, and our patrons have been very pleased with our productions of plays and musicals,” Megan Harms, HHS’s 2014 teacher of the year, said. “We feel that this production of a popular, modern musical theater piece will continue the tradition we have established.”

The program, which implements the talents of over 70 students, produces one play and one musical each year.

“We’ve worked hard over the past five years that we’ve both been here to develop a true theater department where the students benefit from having the perspective of two theater artists,” Megan said. “Our students learn performance techniques as well as technical theater skills, such as design and scenic construction, so it is beneficial for them to learn from both of us and our different skill sets.”

For “Urinetown,” Megan is the assistant director overseeing costuming and props, while Lucas is the director.

“Each year, one of us directs the play and one directs the musical,” she said. “Then we swap the following year. It keeps things fresh.”

Megan said the story of “Urinetown” takes place in a Gotham-like city experiencing a terrible water shortage caused by a 20-year drought.The drought led to a government-enforced ban on private toilets, and residents must use public amenities regulated by a single malevolent company that profits by charging admission for one of humanity’s most basic needs.

Amid the story, a hero decides he’s had enough and leads a revolt to bring the town to freedom.

“‘Urinetown’ is different than most musicals, or rather most people’s perceptions of what musicals are,” Lucas said of the tongue-in-cheek production, adding the “anti-musical” is satirical and “jabs at almost every convention of musical theater.”

Lucas said the production holds nothing back and makes fun of itself while delivering “great social commentary dealing with the growing socio-economic divide, environmentalism and capitalism.”

“It is incredibly funny and pokes fun at itself, even making a joke out of its own title,” Megan added. “It is a satire, examining our society in a humorous way. It will definitely make the audience think about the growing divide between rich and poor, as well as environmental concerns, but it will do so in a funny, musical way.”

She said the show’s music offers a range of styles, and the students’ voices are truly showcased through the songs.

“We always have a list of shows we would like to do, but we choose them based on the current students in the program and their individual talents and abilities,” Megan said. “We always want to showcase our strengths, so we pick show titles based on their potential to highlight as many students as possible.”

Lucas said each year the students want to do something more involved and more challenging.

“They are remarkable and continue to surprise me,” he said. “It is delightful to watch these students give themselves to this art completely and because of this commitment they grow, not only as artists, but as humans as well.”

All “Urinetown” shows start at 7 p.m.

Tickets, which can be purchased online at urinetownhhs.eventbrite.com, are $10 in advance and $15 at the door.