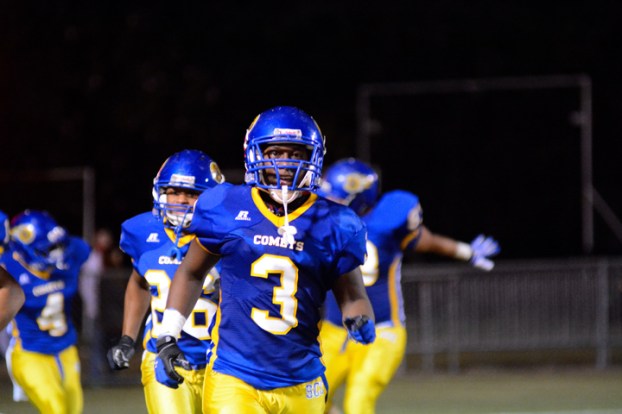 LAPLACE — St. Charles coach Frank Monica demands that his team “pack” four things as it prepares to hit the road for a District 11-3A date with Lusher this Friday night.
“We need to pack our focus, our physicality, our intensity and our preparation,” said Monica. “If we don’t have all of those things this week, we won’t have success.”
The Comets have been on a roll as of late. After a 1-2 start to the season that included lopsided losses to East Jefferson and East Ascension, SCC has reeled off four wins in five games, the lone loss coming to national powerhouse John Curtis.
St. Charles has allowed just one score over its last three victories, shutting out the offenses of Ville Platte, De La Salle and McMain en route to a combined victory margin of 120-2 in those wins.
Is Monica’s team back to playing “Comet football?”
“We’re getting better,” said Monica. “There are still some things that we need to take care of. But I like this team’s makeup. What it lacks in talent, it makes up for with its moxie. We’ve got a good, clean locker room with this group.”
The Comets (5-3, 2-1) faced a run-heavy attack against De La Salle and a pass-first operation in McMain last week. Monica noted that in each game, the Comets were able to focus on stopping one dimension.
But Lusher’s offensive gameplan is a balanced one from week to week, meaning the Comet defense will have a different kind of challenge in terms of preparation this week.
“Their running back (Joshua Barney) is a Division I caliber guy who’s being recruited by a lot of people. They run a lot of play action,” said Monica. “We’ve been able to key on one aspect of the game in each of the last two weeks, but we can’t do that this time.’
“They’re sort of wounded after playing Curtis last week. They’ll be looking at us as a team they can possibly play with.”
Barney will have the biggest target on his chest as far as the Comets are concerned. He’s very much a moving target, at that.
“He lines up so many different places. He’s a really exciting player, a guy that’s hard to take down one on one.”
Quarterback Louis Landrum III and tight end Brian Sackett are also factors. At 6-foot-5-inches and 210 pounds, Sackett offers some unique challenges for St. Charles to meet.
“That big ol’ tight end, he can really block,” said Monica.
“You don’t see many tight ends like him that (block and catch) because you see you many spread offenses now.”
Defensively, Lusher (4-4, 0-2) runs a pressure-heavy scheme from a 4-2-5 alignment.
“They’re not real big, but they’re awfully quick. They play a lot of man coverage,” said Monica. “Offensively, we need to make sure we get off the line and win our matchups in those one-on-one situations.”
St. Charles hasn’t had trouble getting off to a fast start in its recent victories. However, all of those have been at home, where the Comets are 5-0.
Conversely, SCC is 0-3 on the road, though level of competition plays a role — those losses came to the likes of East Ascension, East Jefferson and John Curtis, teams that are a combined 20-3 this season.
“We haven’t played well away from home,” said Monica. “In each of those road games, we didn’t play a good first half. We’ve played better in the second half, but often it’s too late by that point. We need to jump out in the first half, take control and seize momentum before they can.”
A pair of victories to cap the regular season could be a big boon to SCC as playoff scenarios round into form. The Comets are headed for the 16 team “select school” bracket that combined Class 3A and 4A. SCC is currently inside the top eight seeds, which would mean a home game if it holds.
“We’re fighting for a home game,” said Monica. “We’re going to have the toughest bracket of anyone. It’s important for us to stay in that top eight.”