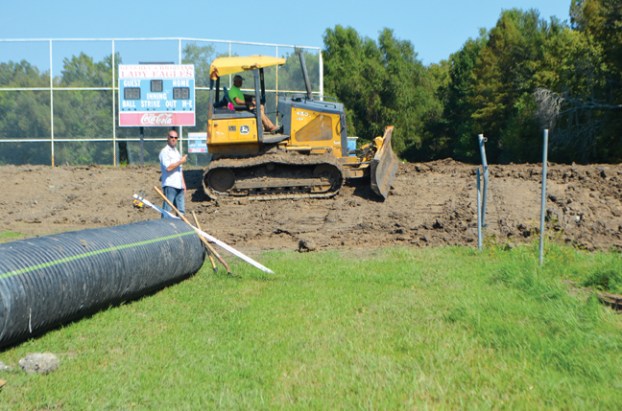 Who needs the corps?

RESERVE – Lifehouse Church in Reserve is taking matters into its own hands and is in the midst of constructing a four-foot levee system around its facilities.
“We know that the Army Corps of Engineers is talking about doing a levee for St. John Parish, but of course, we don’t know the time frame on that. We really felt it was in our best interest as a church,” said Associate Pastor Darren Burlison.
Like many other areas in LaPlace, Burlison said the church suffered major damage last year during Hurricane Isaac because of flooding. Burlison said church members were “riding around in boats” in the back parking lot of their facilities last year. According to the pastor, at least three of the site’s five buildings were badly flooded in the storm, an estimated $1 million worth of damage. All of the buildings had to be gutted.
“In the past, we would get water on the property even from a tropical storm. If the we get the right winds blowing on us for a long period, it pushes water back up on us from Lake Maurepas. There were times when we wouldn’t be able to have service or school,” Burlison explained.
“We’re talking about the levee, but the levee is really nothing compared to the amount of work we’ve done so far getting these buildings finished. We had about a foot and a half of water in this room that you’re sitting in right now,” he said, gesturing to the area around his office. “It was pretty much a total loss, and we just knew we couldn’t sustain another loss like that.”
Burlison said he was “excited” about the levee and went on to say that his congregation has also been overwhelmingly supportive of the building effort.
“We all weathered that storm together, so we all understand the need for it. We all understand that we can’t have another flood like that come in and destroy our buildings. It’s too much,” he said. “I know it’s detrimental to us should another storm like Isaac, or worse, come through. We’re excited that we won’t have anymore problems as far as water goes.”
Burlison said church officials have already gotten the go-ahead from St. John the Baptist Parish administration. With just two months of work, the levee is about halfway done. He expects work to be complete by mid to late December this year, weather permitting.
For more information on the Lifehouse Church or River Region Recovery, visit the church’s website at www.lifehousechurch.us.