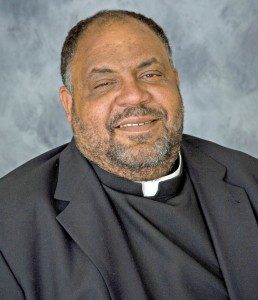 By Barbara Chenevert
Special to L’Observateur

BATON ROUGE – Father Louis Oubre, described as a gentle giant by fellow priests and parishioners he served, died Thursday of an apparent heart attack at the age of 56.
Oubre, who suffered from a kidney disease that forced him out of parish ministry, worked with residents of the St. Clare Nursing Home for the past few years.
Funeral arrangements are pending.
Oubre, who was born in New Orleans but raised in Vacherie, had attended the annual priests retreat at Manresa this week and he seemed tired, said Father David Allen, who was a long time friend and a member of Oubre’s priest support group. He attributed that to an adjustment in his dialysis treatment that began Monday, he added.
He was physically a big man but he had a caring heart that made him a gentle giant. A lot of people would call him Father Teddy Bear, Father Allen said.
“He had a soft spoken voice unless he wanted to be heard, then he could belt it out especially in his Gospel voice,” Allen added.
Ordained in the Diocese of Baton Rouge on May 31, 1986, Oubre served as parochial vicar at Ascension of Our Lord Church in Donaldsonville and at St. Jean Vianney, St. Pius X and St. Louis King of France churches in Baton Rouge.
After filling in as pastor for a 10-week period at St. John the Baptist Church in Zachary, he was appointed pastor of St. Anne Church in Morganza and eventually pastor of St. James Church in St. James, where he served for 12 years.
When St. James was clustered with St. Philip Church in Vacherie, he was appointed pastor of both.
“Being a priest has been as much a blessing as a job,” he said in an interview in 2011 when he celebrated his 25th anniversary as a priest. “I’ve been blessed to experience a lot of different kinds of people – to meet them at different stages of life and in their relationship with God – and to walk with them for a little while. I ‘ve gotten as much as I’ve given.
“The simple faith of some of the people has blessed me,” he added.

National Night Out on Crime