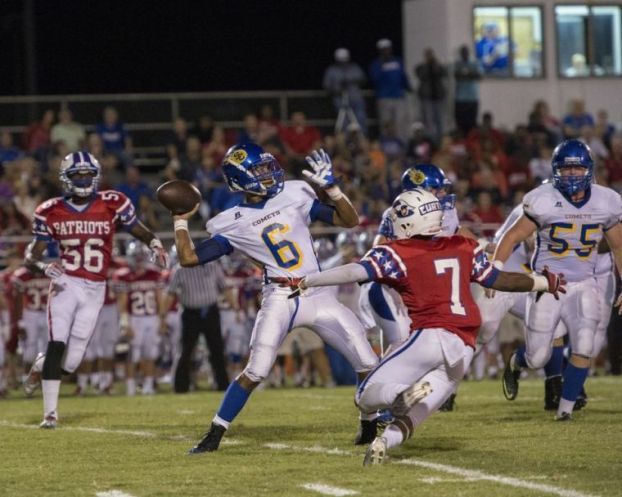 KENNER – It was a difficult matchup and tough Friday night for St. Charles Catholic as the Comets lost their District 11-3A opener to powerhouse John Curtis, 46-13.

The Comets started quickly capitalizing on an early Curtis fumble and scored three plays later on an Austin Weber keeper to take an early 7-0 lead.

But Curtis running back Raekwon James responded immediately with an 87-yard touchdown run on the Patriots next play from scrimmage that started a run of 33 unanswered points.  The junior running back finished the night with 165 yards rushing and two touchdowns.

Curtis running back George Moreira also had a great night on the ground running for 147 yards and two touchdowns on 5 carries.

“I knew that we had to weather the storm, and we didn’t do a good job of weathering the storm,” said Coach Frank Monica after the loss, “When they hit us in the mouth, we didn’t respond.”

St. Charles Quarterback Austin Weber had a rough night overall completing 8 of his 25 passes on the evening for 58 yards and two interceptions, both to Curtis safety Hunter Dale. Weber also had 34 yards rushing.  In his second career start at quarterback, Curtis’s Myles Washington kept the Comets on their heels all game through the air and on the ground.  Washington completed 7 of his 11 pass attempts for 114 yards and also ran for a score.

Erron Lewis was one of the few bright spots for the Comets running for 130 yards and a touchdown on 13 carries.

By RYAN ARENA L’Observateur LAPLACE – Riverside made the most of its final tuneup of the season before a much-awaited... read more