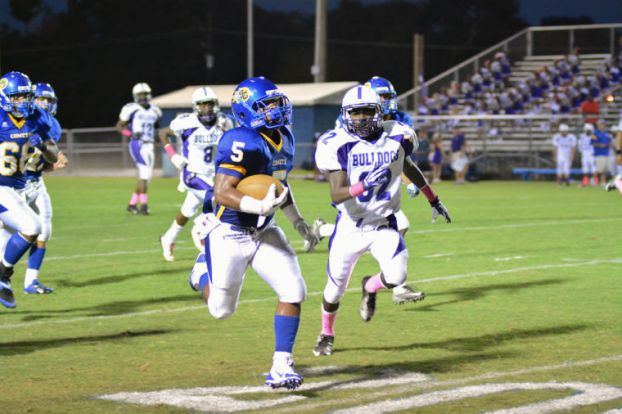 LAPLACE — All Frank Monica wanted for his birthday was for his St. Charles defense to “regain its swagger.”

The Comets gave their veteran coach all he wanted and then some in a 49-0 shutout victory over Ville Platte at Thomas Dupuy Memorial Stadium.

Jordan Favorite kickstarted a complete team effort for St. Charles, returning the night’s first punt 61 yards for a score in a game that saw SCC score touchdowns on offense, defense and special teams.

“We talked in practice all week about it. Coach told us that we needed to make three big special teams plays tonight,” said Favorite. “All the credit goes to my blockers.”

Monica had challenged his defense to step up its play after losses to East Jefferson and East Ascension, games that saw SCC allow 35 and 42 points respectively. After a stronger effort against Miller McCoy last week, his stop unit looked like its old self again on Friday, allowing just 167 total yards and forcing four turnovers.

“All week long, I challenged them. We needed to regain our swagger,” said Monica. This is the first dominant performance we’ve seen from the defense this year.”

“We were doubting ourselves a little bit on defense,” said Favorite, a senior cornerback. “We felt like we needed to come out and show that the old St. Charles defense is back.

6-foot-5-inch Tulane committed tight end Kendall Ardoin was a big concern entering the game for SCC, but he was in and out of the Ville Platte lineup due to an apparent ankle injury.

With Ardoin limited, SCC (3-2) concentrated on stopping tailback Jermarcus Jones, who was coming off of a 124 rushing yard, three touchdown performance. SCC held Jones under four yards a carry, as he totaled 80 yards on 22 attempts.

“We were afraid of some of their explosive players. We weren’t very exotic. It was basic defense and our players rallied to the ball,” said Monica.

SCC capitalized when Austin Weber connected with Dane Authement, who made a leaping grab for a 10-yard touchdown to make it 14-0.

“We needed both of those plays,” said Monica of the punt return and interception. “Getting those plays early gave us some confidence and we built some momentum. We really needed that.”

SCC forced a three-and-out and immediately went to work, Weber again connecting with Authement. This time it went for 57 yards down to the 1, and Mario Young punched it in for a score to make it 21-0 with 1:06 left in the first quarter.

The Comet defense forced another turnover early in the second quarter, this time a fumble recovered by Justin Dubose at the VPHS 22. It took one play this time to cash in, Weber dialing up Brady Becker in the corner of the endzone for a 22-yard touchdown, making it 28-0. That was the halftime score, holding up after SCC stopped Ville Platte (2-2) on a drive that ended at the SCC 18 as time expired in the first half.

SCC drove down on its first possession of the second half and Weber punched it in from a yard out to make it 35-0. A 19-yard Weber touchdown run made it 42-0.

And after beginning with a special teams score, the Comets rounded out their scoring with a defensive touchdown when Young recovered a Bulldogs’ fumble in the endzone for a touchdown. It was the second straight week Young had scored on defense or special teams, after recovering a blocked punt in the endzone a week prior.

Weber completed 5-of-6 pass attempts for 120 yards and two touchdowns. He rushed six times for 42 yards and a two more scores.

Destrehan dominates in 42-17 win over Terrebonne

By Lori Lyons Contributing Writer It’s been six years since the Terrebonne Tigers have had to face a team from... read more