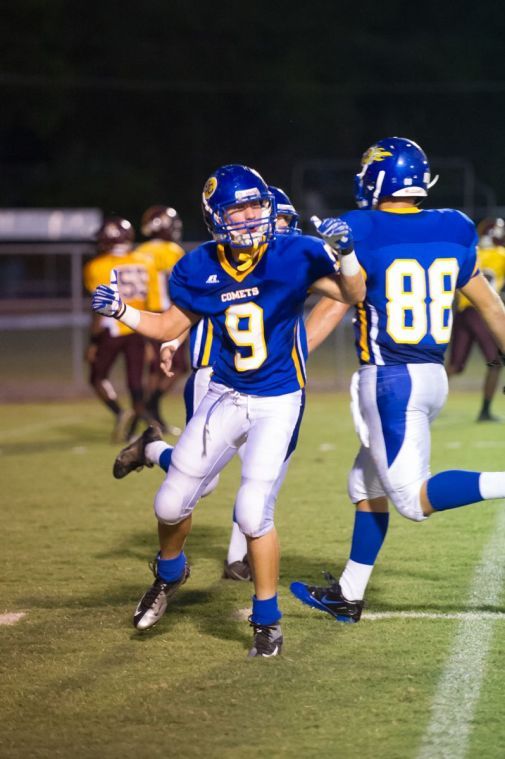 LAPLACE – In each game this season, St. Charles has been either exactly where it wants to be, or nowhere near it.
The 2-2 Comets have two lopsided victories to their credit this season, a 42-14 win over Southern Lab and a 62-20 victory over Miller McCoy, the latter representing SCC’s most recent work. But St. Charles’ two losses have been just as convincing, with ranked foes East Jefferson and East Ascension taking 35-17 and 42-19 wins respectively.  East Jefferson and East Ascension are a combined 8-0; McCoy and Southern Lab are 0-8.
So this week’s matchup figures to be an interesting barometer for coach Frank Monica’s Comets, who will host Ville Platte Friday night at Thomas J. Dupuy Memorial Stadium.
“We’re facing another Class 3A team,” said Monica. “So in terms of numbers and all of that, it’s close. But they’re impressive. They’ve got speed all over the field and defensively, they can make it tough on you with those two big guys at defensive tackle.’
“We’ve got to understand that there’s still work to do. We’re not a complete team at this point. (Ville Platte) is coming in here for a win and after watching us on film, with some of the issues we’ve had, they might be feeling pretty good.”
Ville Platte is off to a 2-1 start this season after moving up to Class 3A — it had an open date in Week 3 — and most recently downed Class 1A Oakdale decisively, 42-12.
The Bulldogs went 7-4 in 2012 in coach Tracey Jagneaux’s first year on the job, reaching the Class 2A playoffs but falling to Loreauville in the opening round.
Seniors Isaiah Thomas, Jemarcus Jones and Kendall Ardoin lead the offense.
Thomas has  passed for 598 yards through three games, 214 of those coming in Friday’s win over Oakdale. Jones scored three touchdowns on Friday, the tailback averaging 6.8 yards a carry this season. He’s rushed for 391 yards thus far.
Meanwhile, Ardoin is perhaps the team’s most athletically gifted player, a 6-foot-5-inch, 215 pound Tulane committed tight end.
“He’s going to be a major matchup problem. We have nobody even close to 6-foot-5 on our team,” said Monica. “They throw it to him in a lot of ways. They’ll line him up at tight end or split him out. It’s like trying to stop Jimmy Graham in some ways.’
“It’ll be hard to stop him. We’ll hopefully be able to have someone underneath him and over the top when they do throw.”
Ville Platte defeated Westminster in its opener, 38-14. It fell to Basile in Week 2, 22-6.
St. Charles kicked its rushing attack into high gear Friday night, powering through the Lions for 308 yards on the ground. Erron Lewis led that attack, gaining 216 yards and scoring four touchdowns on 24 carries. Justin Loupe complimented him with 74 yards and two scores on five carries. Both yardage and touchdown totals were career highs for each back.
That performance came with quarterback Austin Weber — himself always a large part of the team’s running game — sidelined due to injury for what Monica called precautionary reasons. Weber is expected to play this week.
“With Austin out, we challenged Erron and our offensive line to pick up the slack. We also moved one of our running backs (Mario Young) to the secondary for the game, so Erron knew he’d need to carry the load. He accepted the role and came up big. Our line did a good job giving him some lanes. What they did was vital because it kept McCoy’s offense on the sideline.
SCC’s line and run game will be challenged head on by Ville Platte’s huge defensive front, led by lineman James Wilson and Kylan Anderson.
“They’ve got a couple of guys up the middle at 315 and 280 (pounds),” said Monica. ”I think for us, we’ll need to get it out to the perimeter and use our short passing game. Stay out of the middle, where we’re outmanned.”
It’ll be the final game before district for SCC, but Monica isn’t viewing this game as any kind of a tune-up.
“We need a ‘W,’ he said. “We need it for our confidence level. We still need to improve on the basics, simple blocking and tackling.’
“I think if we start to do that on a consistent basis and settle down, we can play the kind of physical football that we need to play.”