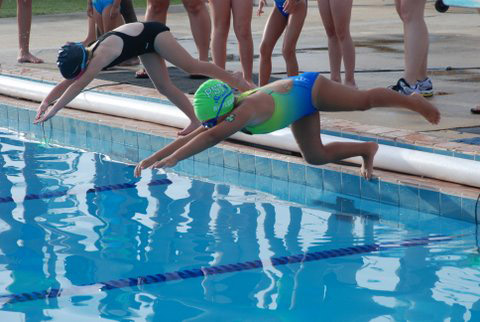 LAPLACE – Though showing vast improvement in their scoring through the first four meets of the 2013 River Parish Swim League season, Piranha Swim Team had no wins to show for it.
That changed Monday night.
The Piranhas took a 30 point lead into the relay events and caught fire, outscoring Ellington 122-28 to close out their first victory of 2013, 325-211.
“We finally won,” said PST coach Blaine Tatje. “Really, myself, coach Hailey (Montz) and coach Kelsey) Tatje, all three of us have been really pleased with the progress we’ve seen from our swimmers all season. We knew it was going to be a rebuilding year. We’ve been more focused on improvement than wins and losses.
“But to see the kids perform so well and for them to get to experience the results of their work … they were so excited. That’s awesome for us to see as coaches.”
PST lost just four total relay races and led throughout after taking a 113-103 lead after the backstroke event. The teams were tied at 54 after the opening event, the individual freestyle.
“We feel like we’ve worked hard on practicing relays, and everyone had their technique down,” he said. “We’re really proud of everyone.”
Carter Volion, Colby Watkins and Cari Jane Roussel led the charge for PST, capturing three first place finishes each.
Two event Piranha winners were Cameron Volion, Alexandra Rutledge and Sophia Simon, while Preston Falgout, Callix Hammett, Sarah Lang, Kyla Cage, Joshua Emery, Justin Jase and Giselle Jase each nailed down a victory to round out the team’s winners. Piranha Swim Team has one meet remaining this season, as it faces LARAYO this Monday at 6:30 p.m. at Belle Terre.