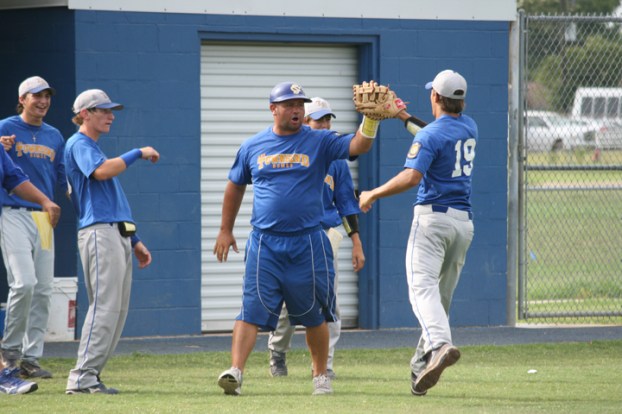 By RYAN ARENA
L’Observateur
LAPLACE – Townsend Homes pitcher Mason Bordelon kicked off the summer by hurling a complete game shutout against Holy Cross. His latest start was about as impressive.
The St. Charles Catholic-based squad avenged a 7-0 loss to Destrehan-based Shell Motiva earlier this summer behind a strong complete game effort from Bordelon, who allowed just one run in a 2-1 victory over Shell Monday at Comet Field.
Bordelon allowed seven hits, walked two and hit one batter en route to his second victory of the summer. It was just the third loss of the summer for Shell (8-3).
“We came out with a different mindset today,” said Bordelon. “The last time we played them, I don’t think we were into it like we needed to be. We were a lot more focused today. We wanted to win.”
That was echoed by Townsend coach Wayne Stein, who said that the team’s focus on using the summer on preparation for next prep season was put on hold Monday.
“I asked them to come out and win,” said Stein. “Results, wins and losses, that’s kind of been something on the backburner for us. We’ve been focused on establishing our lineup and rotation for next season. But I just asked them to find a way today. I was sick of losing. I think we all were. Our kids really responded to it.”
Bordelon outdueled Shell’s Ryan Brewer (1-1), who pitched a strong game of his own in his first start of the summer. He allowed six hits and walked three.
“There was one stretch where I think I overworked him a little. Since then, we’ve been able to give (Bordelon) a lot of rest,” said Stein. “I think what you saw today, and in that first game against Holy Cross, that was the real Mason Bordelon. When he’s on, he’s as good as anyone.”
Said Shell Motiva assistant coach Chris Mire, “I thought (Bordelon) did a great job. He kept us off balance all day. We weren’t really able to get going at all.”
It was a game full of standout defensive plays. The teams combined to turn four double plays, three of them by Townsend.
One of the game’s most critical defensive plays came in the second inning, after Townsend (5-6-1, 3-6) established a 1-0 lead in the first inning. Brock Benedetto, Austin McDonald and Logan Babin each rapped out base hits; but on Babin’s hit, Eian Mitchell uncorked a pinpoint throw from right field that beat Benedetto to the plate, recording the third and final out of the inning and denying Shell any runs in the frame.
“That play was huge,” said Stein. “Eian’s a catcher by trade, but we needed him out in right today, and he delivered one of the biggest plays of the game.”
Said Shell assistant coach Chris Mire, “If I had to do it over, I’d send him again. Early on, you want to put pressure on them to make a play. Give credit to (Mitchell), he made a great throw there.”
Shell Motiva came up with a huge defensive play of its own in the third, after Townsend Homes loaded the bases with no outs on the back of consecutive singles by Dane Authement, Austin Weber and Jon Brown. Townsend increased the lead to 2-0 on a Mitchell ground ball, but in the process Shell turned a double play that limited the damage inflicted to that lone run.
In the sixth, Shell cut the lead to one. Brennan Breaud walked to lead off the inning and Jacob Cambre singled. Sam Steib grounded into a double play, but it scored Breaud to make it 2-1.
Shell had one final chance in the top of the seventh to extend the game. Bordelon hit Austin McDonald to lead off the inning, and Logan Babin singled with one out. Hunter Abadie bunted the runners over, giving Breaud a chance to lift Shell into the lead. However, Bordelon got him to pop out to end the game.
OTTO CANDIES 1, TOWNSEND HOMES 0 – On Friday, Hahnville-based Otto Candies picked up its second close victory of the summer against Townsend Homes, winning behind Todd Porche’s two-hit shutout.
Connor Smith took a hard luck loss for Townsend Homes. Smith pitched his own two-hitter, allowing just one run in the third inning in a complete game effort.

By RYAN ARENA L’Observateur LAPLACE – Riverlands improved to 2-1 Monday night via a victory on the road, besting Ellington... read more