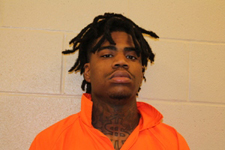 KENNER – A former LaPlace resident was shot and killed Wednesday in Kenner.
The Kenner Police Department responded to a shooting at the Sugar Mill apartment complex, located at 4520 Williams Blvd., on June 19. Officials discovered the body of Tajh Michael Thomas, 20, formerly of LaPlace, inside an apartment.  Thomas was pronounced dead on the scene.
Although Thomas was from LaPlace, he was living at the Sugar Mill apartments with his cousin, identified as Trey Perrilloux, 20. Perrilloux was arrested after he returned to the apartment complex and observed officers outside his apartment.  Perilloux attempted to flee and was captured by officers.
Perrilloux was found to be in possession of 133.3 grams of marijuana. A search of the apartment revealed an additional 1.7 grams ofmarijuana, 24.1 grams of hash and two handguns and a shotgun.
Investigators believe the motive for the homicide to be narcotics related. Kenner Police are attempting to verify if the guns are stolen. The homicide remains under investigation.
Perrilloux was charged with the crimes of illegal possession with the intent to distribute marijuana and possession of drug paraphernalia. As of press time, Perrilloux remains in custody with no bond set.
Kenner Police Chief Steve Caraway urges anyone with information concerning the murder of Thomas to call Kenner Police Detective Charlotte Synigal at 504-712-2255 or Crimestoppers at 504-822-1111.