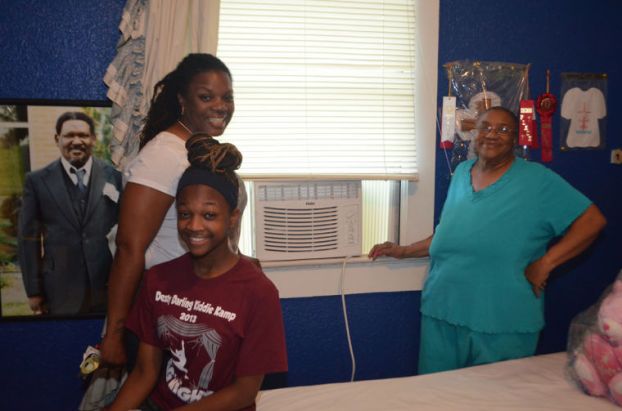 Group brings relief to most vulnerable

LAPLACE – Niki Parquet and her new community/social organization, Life Changers, are footing the bill to do some good in the community.
Parquet, 40, who recently moved back to her hometown of LaPlace after living in Atlanta, Ga. for many years, said she was surprised at the amount of violence going on in the community. Parquet wanted to help but did not want to work for a law enforcement agency.
“I’m a criminal justice major, I should be able to do something,” she said. “I knew the elderly were suffering and the young ones were killing each other, so I said ‘What can I do?’
So Parquet organized a car wash at Auto Zone to raise money to purchase air conditioners for the elderly and single-parent families in need. Parquet said they charged $10 per wash but received many donations from residents. Some even donated actual air conditioners on the spot. The small group raised nearly $200 in its initial effort.
They were able to give 69-year-old Beatrice Jones an air conditioner for her bedroom. Jones said she felt refreshed, because she didn’t know that the youth of today participated in activities like this.
“I was happy when my daughter told me. I shed a few little tears,’” said Jones.
So far, Life Changers has only four members. As the organization grows, Parquet hopes to start several other initiatives such as math and reading programs, and a paternal mentorship for children without active fathers in their lives.
“You have the Big Brother program, but…some kids need fathers. We’re going to call it “Other Father.” It’s just like the Big Brother program but the responsibility is greater because you become that child’s keeper. You’re like their father,” said Parquet. “It’s not a financial thing, but more of a physical thing. Making sure these kids stay on the right track and have someone to talk to. I believe with more of that, we’d have less of the killing.”

Local restaurateur comes out on top