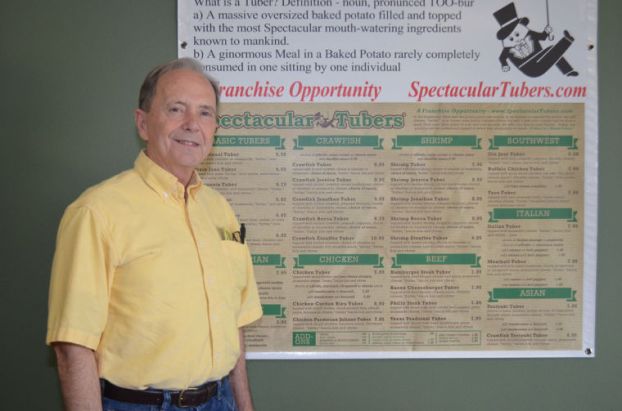 Local restaurateur comes out on top

LAPLACE – Gary Ricks is living proof people can change, given the right circumstances.

Ricks, the owner of Spectacular Tubers, said he was living the high life during the economic boom of the 1980s. At the time, he was the owner of a deli, Pudgy’s, named for his sister. The business owner saw a large amount of success shortly after opening Pudgy’s when the restaurant was featured on his local news station in a two-minute segment called “Neighborhood Gourmet.”

Sales tripled after the feature, but Ricks said he did not know how to handle money properly and didn’t know how to deal with people. He also blames his overindulgence in alcohol.

“Everything was Pudgy’s back then,” said Ricks. “I stayed drunk. I had the Corvette and all that stuff and just never paid attention to the business. The world revolved around me, and I’d just as soon as fire you than work with you. The party lifestyle, chasing women. I stopped short at drugs, by the grace of God,” he said.

Eventually, the major fast food chain Wendy’s developed its 99-cent baked potato, a move that tanked his growing business. Pudgy’s was a deli but also featured baked potatoes prominently on its menu. Ricks said that his $5 potato just couldn’t compete, despite its hardiness.

“I stayed  drunk to avoid facing the issues. I really didn’t know what to do about it. I was just too immature, even at 31 years old,” said Ricks of himself at the time. “It was beer for breakfast, and of course when sales got worse, I’d look at the checkbook and go to Bennigan’s and wait for them to open so I could get a Long Island Iced Tea,” he continued.

Ricks said he had just gotten home from work one day when he happened upon an excerpt of James Dobson’s book “When God Doesn’t Make Sense.” Ricks subscribed to Dobson’s Focus on the Family magazine because it looked good on his coffee table, but he’d never actually picked up the books before then.

“I found myself in the front room, on my knees in tears. When I got up it was like the weight of the world was lifted off my shoulders. I didn’t find out until about six months later that that was what’d happened because I knew nothing about being born again,” said Ricks.

“I knew nothing about God coming in and showing you what you were really like on the inside — I saw the perversion, the thievery, the arrogance, the pride. All that stuff was in me, and it weighed on me so heavy it brought me to my knees. I saw who Gary Ricks really was, and I didn’t like it,” he said.

After this revelation, Ricks made an effort to change his life for the better. It took a little while, but the restaurant owner said that God has restored everything for him. He was remarried just a year after the big change, and is now the father of five children and the owner of two restaurants.

Ricks said he featured baked potatoes prominently on the menu of Aunt Ellie’s after he purchased it in 2003 but craved more “simplicity” in the menu style. He soon decided to take potatoes off of the menu there and create a separate restaurant in August 2009. This became Spectacular Tubers, the spot known for huge baked potatoes stuffed with a variety of toppings. Aunt Ellie’s still serves fried seafood and other home-style cooking

Spectacular Tubers has seen so much success since its opening that it has already branched off into new franchises. Last year, Ricks said he opened a store in Scott, La. He is currently in negotiations to add two more locations, one in Baton rouge and another in Gonzales. In addition, he is in talks to create franchises in Colorado and Montgomery, Ala.

When asked how he feels about his success, Ricks said there is no room for pride or arrogance anymore. Anytime he starts to feel too good about himself, the business owner said he tries to remember how things were in the ’80s.

“I have five children, so my main focus now is supporting my family. As they grow older, you know that the financial responsibilities go to the orthodontist and college. I feel like it’s God’s provision to be able to provide for my family and be able to give them the things that I know they need,” he said.

Spectacular Tubers is known for baked potatoes, but Ricks said he plans to do special promotions on their sandwiches and salads within the coming months.

Ricks also mentioned that his initial failure has taught him to handle his businesses differently.

“I pay attention to the state of my flock. That’s something I never did before. Actually, some days I work the primary line or I work the counter. I stay involved in the operations,” he said.

The two local franchises of Spectacular Tubers are located on Belle Terre Boulevard in LaPlace and on Louisiana Highway 3125 in Gramercy.