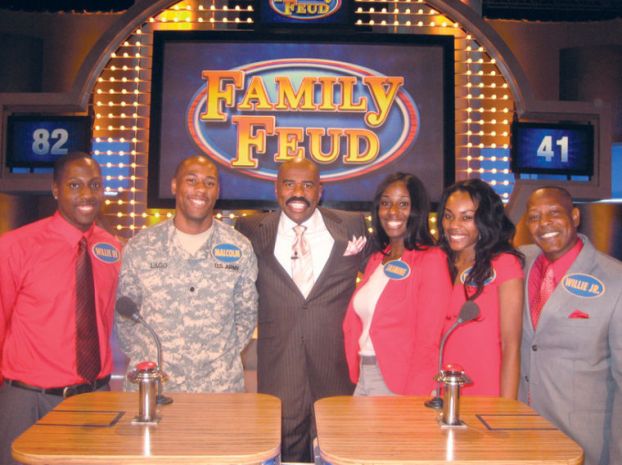 LAPLACE – Willie Lago Jr., a LaPlace resident, and his family recently had the opportunity to appear on game show Family Feud for a second time.
Lago said he, his two sons, Willie III and Malcolm, and two daughters, Jasmine and Tramaine, began their adventure with Family Feud last year during Father’s Day, when they randomly decided to make a video in hope of appearing on the show. The end result was a “The Fresh Prince of Bel Air”-themed pseudo-rap session that was both lively and entertaining. The minute-long video has gotten more than 1,800 hits on YouTube.
“It was Father’s Day, and the kids came, and they wanted to audition. We all got together and wrote little things. The other family members were behind the scenes. It was so hot. The AC went out, but it would end up being a great thing for the family. I believe it was a tool that God used to bring us together and blend the family,” said Valerie Lago.
The Lagos sent the video in the same day. They were then contacted for an audition and went to the convention center in New Orleans with several other families where they all practiced the show with mock games. Willie Jr. said he was a little apprehensive at their initial audition.
“There were so many families there, and we watched a couple of auditions before us. My children were really laid back,” said Willie Jr.
Willie Jr. said the family was eventually contacted via email to move on to taping an actual show in Atlanta. The family was flown out to the city for a three-day trip where housing and transportation were provided for them. Willie Jr. said when they got there, his initial suspicions about why they were chosen were confirmed.
“They chose us because of the video. They said they kept watching it over and over — they were singing the video to us. They knew the video,” he said. “They probably went through the process at the convention center, but they already had their minds made up to choose us because of the video,” said Willie Jr.
“Everything that they were looking for the Lagos had.” said Valerie.
Willie Jr. said that all contestants were put into one room to sit in the audience and watch the games being played on the show while they waited. Similar to other game shows, Willie Jr. said the inside of the studio is like a large party with music playing. The Lago family was the last to be taped out of seven families.
They also happened to be attending the taping for the last show of the last season.
Willie Jr. was the first to go up but was beaten to the buzzer by the a member of the opposing family, the Turnbergs. The Turnbergs had already been on the show several times and were experienced enough to put the Lagos at a disadvantage.
“Everybody was pretty nervous. We were losing all the way until the end. We were pretty much getting whooped,” said Willie Jr.
The game took a turn for the better when the final request was made: name a special day when calrories don’t count. The Turnberg family took the first answer by naming “Christmas.” Malcolm Lagos named “Thanksgiving” next, and used the higher ranking answer to move the rest of the questions to his team. The team picked up a strike when Willie III answered New Year’s Eve, but Willie Jr. was able to recover points by naming “birthdays.” It turned out to be the number one answer.
There was only one answer left to fill — the host, Steve Harvey, told Jasmine Lago that a win depended on her answer alone. Jasmine thought quickly and answered “Valentine’s Day,” winning the game for her family.
The rest is history. Coincidentally, the initial showing of the episode premiered this year on Valentine’s Day.
The Lagos won their first game, but since they were the last family to be taped, they were not able to play another game immediately. The family was invited back to participate in another game at a later date. The Lagos just finished taping their latest appearance on the show last week.
Willie Jr. said the most recent appearance was funny but couldn’t divulge any more information.
He said he would go back to the show as many times as they let him on.
The Lagos have not received a schedule for their newest taping but expect it to premiere on television later this year or early next year.